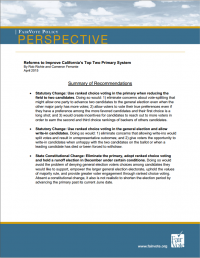 The California Top Two system has significant problems, but they can be mitigated by statute without radically changing the system. FairVote’s new Policy Perspective addresses California’s Top Two Primary System and describes statutory and constitutional reforms that would greatly benefit California voters.

California adopted the “Top Two” primary system for state and federal offices in 2010. Most states nominated candidates for the general election using partisan elections or petition processes. Top Two pits all candidates against one another in “preliminary” elections with the two highest vote-getters advancing to the general election, even if those candidates come from the same party.

Since its adoption, FairVote has provided detailed critical analysis of Top Two. In particular, FairVote has advocated for the adoption of a Top Four primary system in California. In this Policy Perspective, we describe ways in which California could modify and improve its current Top Two system.

First, we describe two statutory amendments to incorporate ranked choice voting into the Top Two primary and the general election. Each of these reforms may be easily implemented and would enable voters to vote their true preferences without concern over vote-splitting and minimize single-party general elections.

Next, we examine a potential amendment to the California Constitution to hold a Top Two general election with a contingent runoff, similar to Louisiana’s current election method, or use of the Top Four primary  with ranked choice voting. While each of these reforms might not remedy all of the problems with Top Two primaries, they would improve voter experience and promote more representative outcomes.