Top Four is the ranked choice alternative to Top Two.

Top Four uses a two-round election cycle to elect a candidate to a single-seat office like mayor, governor, or senator. There is no state-sponsored "primary" election in which political parties nominate candidates, though political parties remain free to endorse candidates by any means they choose. The first round consists of a preliminary election taking place just before the general election, as close to the general election as administratively feasible. In that election, all candidates seeking the office run against each other irrespective of party preference. Every voter casts a single vote for a preferred candidate.

The general election ballot then includes the four candidates who received the most votes in the preliminary election, again irrespective of party preference. For example, a Democratic-heavy district may feature two Democrats, one Republican, and one Independent. The general election is then conducted by ranked choice voting. 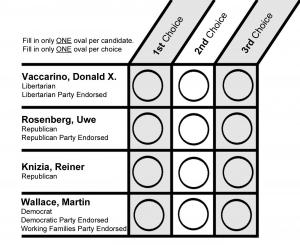 Under ranked choice voting, voters indicate a first choice preference while also noting their second and third preferences among the other candidates. Every ballot initially counts for the candidate marked first. Then, the candidate with the fewest first-choice preferences is defeated, and each ballot is added to the totals of its highest ranked continuing candidate. That process then repeats one more time to identify the two candidates with the greatest support. The candidate with the majority of votes in that final round is elected. Because there will always be four or fewer candidates, voters will have a consistent ballot allowing three choices and a straightforward voter education message of "as easy as 1-2-3."

Several states have considered the use of a nonpartisan preliminary election, but so far proposals have been limited to "Top Two," which advances only two candidates to the general election and never uses ranked ballots. The hope has been that crossover voting in the preliminary election and the possibility of two candidates from the same party competing against each other in skewed districts will help to take the partisanship out of candidates and reduce polarization. Unfortunately, experience has largely proven those hopes misguided.

In fact, Top Two has not changed much. Most elections still feature one Republican and one Democrat, but under Top Two voters lack any alternative candidates. Occasionally Top Two does advance two candidates from the same party, which may render a more competitive race in heavily partisan districts, but at the cost of providing no choices outside of the majority party to any voters within that district. And often such races happen as a result of vote-splitting among a large number of candidates in the preliminary.

On the other hand, Top Four would advance two candidates from the majority party in nearly every race. It would also advance at least one candidate from each major party. And it would advance far more Independent and alternative party candidates. Top Four would thus accomplish the goals of Top Two better than Top Two while avoiding the pitfalls that have led to many opposing the system.

Top Four for Washington and California

The Top Two System in Action: Washington State 2008-2012: This report analyzes the results of Top Two in Washington State over three election cycles, demonstrating the lack of voter choice and competition that has resulted from the use of that system. It also simulates the results under a Top Four system, demonstrating that it retains the nonpartisan preliminary election of Top Two while ensuring enhanced competition and expanded choice for voters.

Fixing Top Two in California: This policy perspective takes a critical look at California's 2012 elections under Top Two with its new independent redistricting commission. It finds that Top Two imposes a number of costs on California's democratic process, but that a Top Four approach would ameliorate all of Top Two's major issues in California. It further recommends amendments to promote the association rights of political parties.

California's Proposition 14: Weaknesses and Remedies: Written shortly after Top Two was adopted in California, this report prospectively criticized Top Two and recommended a number of changes, including the possibility of advancing more than two candidates to the general election.

What is Ranked Choice Voting?