Congressional and Presidential Primaries: Open, Closed, Semi-Closed, and Others

This page details information about the main categories of congressional primaries in the United State (open, closed, semi-closed, and others) and puts each state into one of these categories. We also include information regarding the type of presidential primary or caucus held in each state. In addition to the map below, check out our interactive map at the bottom of this page.

Much of the rules listed here can be changed by an internal political party process. Consequently, sometimes one political party will use one process while another political party uses a different process. This sometimes makes it difficult to track changes. This information is as up-to-date as possible as of July 2015. However, states and parties regularly make changes to their primary or caucus rules. If any of the information below has changed, please email us at info [at] fairvote.org and we will review our information and update it, if appropriate to do so.

Also note that the categories listed here are broad. States employ a variety of rules, so be sure to look at the "Remarks" column for your state. 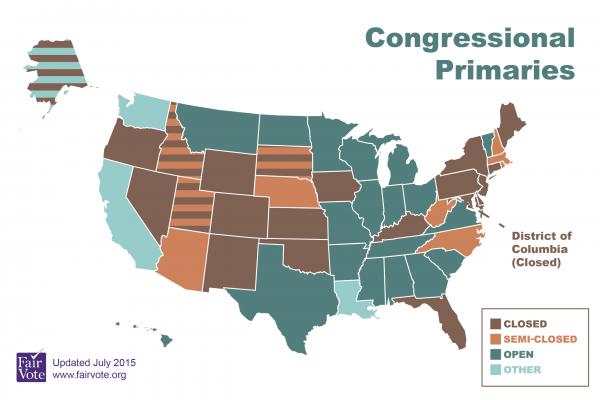 In an open primary, voters of any affiliation may vote in the primaries of any party they choose. They cannot vote in more than one party's primary, although that prohibition can be difficult to enforce in the event a party has a primary runoff election. In many open primary states voters do not indicate partisan affiliation when they register to vote.

One area of contention in open primaries is "crossover" voting. It most often involves voters affiliated with one political party voting in the primary of another political party to influence the other party's nomination. For example, if a district routinely elects the Democratic nominee, Republican voters may attempt to swing the Democratic primary election toward a more conservative nominee. Occasionally, there also are concerns about sabotage, or "party crashing," which involves partisans strategically voting for a weaker candidate in another party's primary in the hope that the opposition party will nominate a candidate who is easier to defeat in the general election.

In a closed primary, only voters registered with a given party can vote in that party's primary. States with closed primaries include party affiliation in voter registration so that the state has an official record of what party each voter is registered as.

Closed primaries preserve a party's freedom of association by better ensuring that only bona fide members of the party influence who that party nominates, but critics claim that closed primaries can exacerbate the radicalization that often occurs at the primary stage, when candidates must cater to their party's "base" rather than the political center.

In a few states, independent voters may register with a party on Election Day. However, they must remain registered with that party until they change their affiliation again.  A handful of states even allow voters registered with one party to switch their registration at the polls to vote in another party's primary. In these rare instances, a closed primary can more closely resemble open or semi-closed primaries than the closed primaries of other states. Such states are still considered "closed," however, so be sure to refer to the "Remarks" column for your state to see if that is the case.

In a semi-closed primary, unaffiliated voters may choose which party primary to vote in, while voters registered with a party may only vote in that party's primary. Representing a middle ground between the exclusion of independent voters in a closed primary and the free-for-all of open primaries, the semi-closed, primary eliminates concerns about voters registered  in other parties from "raiding" another party's nominating contest.

People who align with a given party may theoretically still vote in another party's primary if they are registered as independent. The potential for such tactical party registration is also present in the strictest of closed primaries.

In addition to the above three broad categories, some states use one of the following methods to nominate candidates for Congress:

California and Washington use Top Two for state and congressional offices. Nebraska uses a Top Two system but without party labels on the ballot at all for the election of its nonpartisan state legislature.

Top Two should not be confused with "open primaries." Open primaries retain partisan nomination while allowing any voter to participate in the nomination process for any party. By contrast, the top two system eliminates party primaries altogether, with the field winnowed regardless of candidates' party affiliation.

The Louisiana system, sometimes called the "Cajun Primary," eliminates the primary election altogether. Instead, all candidates, regardless of party affiliation, run on the same ballot in November. If a candidate receives more than half of the votes, that candidate is elected. If no candidate wins with a majority, the top two vote-getters face off in a December runoff election. Qualified absentee voters receive a ballot for the November election and a ranked ballot for the December runoff, so that they can vote as normal in the general election and then have their ranked ballot count for whichever runoff candidate they ranked highest in the runoff election.

This system mirrors a nonpartisan runoff election process used in many local elections, except with the use of party labels. Although Louisiana law refers to the election in November as the "primary" and the December runoff as the "general" election, the November election takes place on the federally mandated Election Day, and most candidates win office by receiving a majority vote in that election, so it is best understood as a general election, with the December election as a contingent runoff.

The Louisiana system is sometimes mistakenly equated with the Top Two system, but holding the first election in November and electing any candidate with more than 50% of the vote in that election makes it sufficiently distinct that it should not be understood as a mere variant of Top Two.

The following is a list of states by type of primary election, last updated July, 2015.