FairVote makes democracy fair, functional, and representative by developing the analysis and educational tools necessary for our reform partners to win and sustain improvements to American elections. We are a non-profit, non-partisan organization with a history of working with people from across the spectrum. To help promote FairVote's key reforms, download and distribute FairVote's Reform 2020 Vision two-page flyer.

Who Funds FairVote? See our financial information and our year-end reports.

"I love FairVote in that we're dealing with structural issues." - Marie C. Wilson

As Americans, we elect representatives at all levels of government, from local school boards and state assemblies to Congress and the presidency. With government depending on the consent of the governed, we have the right to expect our voices to be heard, our views to be respected, and our votes to truly count.

But American democracy today is not working. Our national government is trapped in gridlock, leading to historic levels of dissatisfaction and, in 2014, our lowest level of turnout since 1942 - and turnout in primaries and local elections is far lower Our diversity of political views are  shoehorned into one of two fiercely partisan camps, too often silencing needed debate and making it hard for elected officials to work across party lines.  New voices are shunned as spoilers, and with a partisan vice grip locking down most elections for one party, too many of us lack meaningful choice among two candidates, let alone three. American governments rarely reflect the American electorate - from  women and racial minorities to urban conservatives and rural liberals. 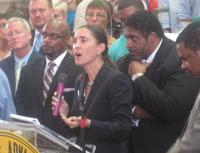 "The work that FairVote does on proportional voting is so valuable, because it's one of the most important ways we can improve how democracy works." - Anita Earls

It’s easy to see that something is broken in American politics. It’s harder to figure out why - or how to move forward.

At FairVote, we think in structures. We look beyond the short-term actions of parties and power-seekers and into the systems that shape their behavior—the rules that govern our government. And when it comes to how our elected leaders behave, the way we elect them is the most important system of all. To fix American politics, we need to fix how we choose our politicians.

We believe there are simple and common sense ways to strengthen our American democracy to ensure all voices are heard, all views are respected, and every vote really counts. That's why we work to study these problems,develop practical solutions, and work with national, state and local partners to advance reforms that result in fairer elections.

Please watch this short video on big picture reforms we believe are in reach in the coming decade.

These reform ideas have come out of our focusing our research, outreach, advocacy and reform work on structural solutions to three core principles of a fair vote:

We believe that a healthy and long-lasting democracy relies on every citizen having a right to a vote that can really contribute to meaningful representation. Working together to address barriers to truly democratic elections, we can bring power back to our vote and make our democracy work better for everyone.

Our continued success relies on your support - consider making a donation today.

National Popular Vote: Every vote equal in the election of the United States president.

A Constitutional Right to Vote: Universal voter registration and a local movement to inspire participation and secure access to the polls for all qualified voters.