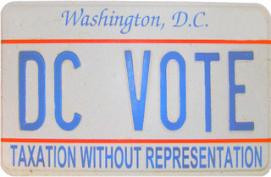 Most Americans assume that all U.S. citizens have a right to vote and a right to representation (two Senators and a Representative). However, this is not the case for the approximately 600,000 residents of the District of Columbia. Although these citizens live in our nation’s capital, pay federal taxes and serve in the armed forces, they do not have representation in their federal legislature. District residents have no representation in the Senate and a non-voting Delegate in the House. As a result, DC residents are relegated to second-class citizenship. They are unable to bring grievances to influential Federal officials or reap the benefits Senators and Representatives are able to provide to their constituents.

While DC residents did have representation in the early 1790’s, DC residents lost their right to vote in 1801 after the passage of the Organic Act, when Congress voted to take control of the District of Columbia. This occurred just ten years after the ratification of the U.S. Constitution and a mere 26 years after the famous declaration by Sam Adams--“No Taxation Without Representation”-- a version on the motto remains on DC license plates today.

FairVote firmly stands behind the right of every U.S. citizen to have a meaningful vote. DC residents are no different than all other Americans and should not be treated as such. If Congress can take away voting rights of citizens, then surely it can replace them. Every DC resident should be able to elect a voting member of the House of Representatives and two U.S. Senators.

FairVote Policy Perspective:
Outside Looking In: How Shutting Washington, D.C. Out of the Presidential Primary Process Hurts Black and Urban America by Ryan Griffin