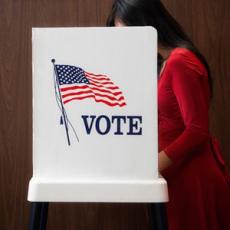 Robust voter turnout is fundamental to a healthy democracy. As low turnout is usually attributed to political disengagement and the belief that voting for one candidate/party or another will do little to alter public policy, "established" democracies tend have higher turnout than other counties.

Voter turnout in the United States fluctuates in national elections, but has never risen to levels of most other well-established democracies. In countries with compulsory voting, like Australia, Belgium, and Chile, voter turnout hovered near 90% in the 2000s. Other countries, like Austria, Sweden, and Italy, experienced turnout rates near 80%. Overall, OECD countries experience turnout rates of about 70%, while in the U.S., about 60% of the voting eligible population votes during presidential election years, and about 40% votes during midterm elections.

What Affects Voter Turnout Rates in the U.S.?

There are countless factors that can influence voter turnout, such as electoral competitiveness, election type, voting laws, and demographics of the voters. Learn more HERE.

How Can We Increase Voter Turnout?

FairVote advocates a number of systemic electoral reforms that reverse the contextual reasons for low turnout.

Fair Representation Voting for legislative elections would allow for outcomes that better represent the diverse beliefs of the electorate, and could therefore combat the low voter turnout that we see in many winner-take-all plurality districts, where choices are limited.

A National Popular Vote (NPV) for president, which would make every vote in every state equally valuable in every election, would expand presidential campaigns from just ten states to all 50. As voter turnout is markedly lower in states that receive no presidential campaign attention, the reallocation of campaign resources to include non-battleground states would likely increase turnout in those states.

Instant Runoff Voting (IRV) for other single seat offices like mayor and governor would better represent the views of third party and independent voters, as more candidates would be inclined to run. Therefore, voters who might not feel that their views are represented in a two-party race would turn out to the polls to support their preferred candidate.

Universal Voter Registration would modernize voter registration in the United States, making government responsible for maintaining accurate and complete voter rolls, shifting our system from its current opt-in structure to an opt-out structure.

Learn more about voter turnout in the U.S. and abroad at these sites.

Here are some of our most recent reports and blogs on voter turnout.

Preference Voting and Voter Turnout: The Case of Cambridge, MA