Who Picks the President? 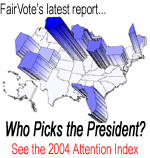 FairVote's Who Picks the President report tracks television spending and campaign visits by major candidates during the height of the 2004 presidential election. The report seeks to ascertain just how wide the gulf between swing and non-swing states has become in a modern election, and the conclusion --vast-- is hardly reassuring for supporters of American Democracy.

See where your state ranks (updated for the 2008 election!).