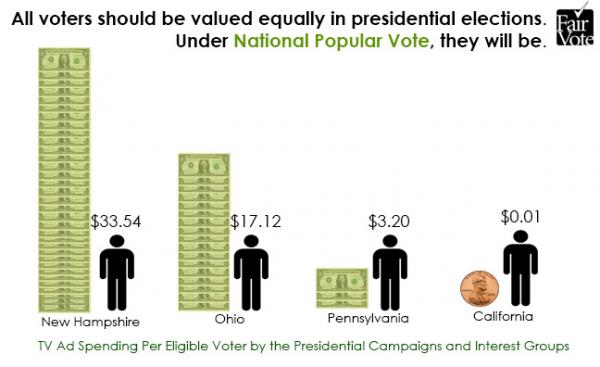 Every vote cast in every election should be of equal value, regardless of where a voter lives or for whom they vote. Popular will should never be threatened by illogical, anachronistic mechanisms divorced from the democratic ideal of one person, one vote. Nor should our system be such that candidates can win single-seat offices despite being opposed by the majority. Americans deserve a system in which all voices can be part of the debate without fear of "spoiling" an election; one that is transparent, accountable and honors equality and majority rule.

Therefore, FairVote supports several reforms to the way that we elect out president. The first is the National Popular Vote Interstate Compact, which would make every vote by every American equally important in the general election (for more information on National Popular Vote, see here).

For more on our commentary and reform proposals, see below.

The Presidential Tracker provides information on where the candidates have been holding campaign events since the end of the Democratic National Convention. As is to be expected, there has been a marked focus on swing states. In fact, in the past two months, the candidates have only held campaign events, defined as events meant to court voters in the place where the events are held, in 11 states. However, they have been fundraising heavily in places where they are not campaigning, such as New York, California, Texas, and Georgia.

In addition, since 2009, FairVote has been tracking the movements of the President Obama using data from the Washington Post's ‘POTUS Tracker' in order to examine the effect of battleground status on presidential attention. Fairvote's analysis of Presidential visits and events shows a significant emphasis on the declared 'battleground states' for the 2012 election and, in the period before the Republican and Democratic National Conventions, a heightened attention to states with high donation rates in the 2008 election. We have also tracked where Mitt Romney has spent his time campaigning since he became the presumptive Republican nominee on April 24, 2012. For spreadsheets of his data, check out our Presidential Tracker page.

See our commentary on how the winner-take-all method of allocating Electoral College votes affects the way the candidates are campaigning during the 2012 election cycle here.

Throughout the Republican presidential primary season, FairVote assembled key resources to help understand the nomination process and illustrate the ways in which that process is fundamentally flawed.

The presidential primary system is broken. At FixthePrimaries.com, FairVote offers a number of alternative systems the parties could use to nominate their presidential contenders. These proposals, including including the FairVote-backed American Plan, would make the process saner and allow more voters to be heard.