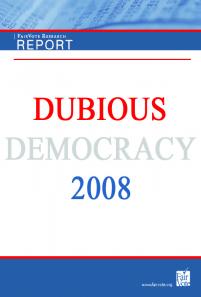 our biannual report on the state of democracy in elections to

the U.S. House of Representatives.

In this eighth edition, Dubious Democracy 2008 provides a comprehensive assessment of the level of competition and accuracy of representation in U.S. House elections in all 50 states from 1982 to 2008. It ranks each state on a “democracy index” that is a relative measurement based on average margin of victory, percentage of seats to votes, how many voters elect candidates and number of House races won by overwhelming landslides.

Dubious Democracy has one overriding message: although our constitutional framers gave the House of Representatives extraordinary powers and, of all the branches of government, the clearest accountability to the American people, that accountability has been destroyed beyond all recognition.

FairVote – The Center for Voting and Democracy advocates for changes that promote voter choice and fair representation, such as: proportional voting methods, instant runoff voting and public interest redistricting methods. These reforms can greatly improve representation and accountability, increase competition, enhance debate of issues and ultimately improve public policy and national unity. Dubious Democracy makes it clear that serious consideration of these changes is long overdue.

Use the links on the right to navigate Dubious Democracy 2008.