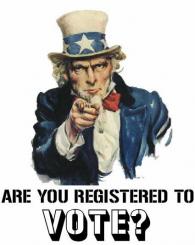 The past few weeks have brought us a lot of voter registration news that shows that we are moving closer and closer to a system of universal voter registration. I reported earlier this fall that states across the country have introduced youth voter pre-registration bills that would set a uniform voter registration age at 16-years-old. Now, we're seeing states that have already adopted youth pre-registration promoting policies that would expand pre-registration opportunities in high schools. Project Vote reports that legislators in Florida have introduced H. 407 (S. 524), which, "Requires each district school board & county supervisor of elections to jointly provide voter-education program to high school students who are eligible to register or preregister to vote; requires education to consist of mandatory presentation by supervisor of elections to public high school students; requires presentation to be made available to nonpublic high schools upon request; provides guidelines for program content."

Florida is one of three states to have a uniform voter registration age of 16 and H. 407 would go a long way in making sure their pre-registration policy is being implemented to its fullest potential. A new report released last week by George Mason University professor and Brookings Institution fellow Michael McDonald, suggests that programs like the one these Florida legislators are offering could help improve voter turnout. On his blog, he writes:

The report finds that [Florida and Hawaii] preregister tens of thousands of eligible young people who remain on the voter rolls at rates comparable to the adult population. Preregistration appears to have a modest positive stimulative effect on voter turnout.

Based on Professor McDonald's interviews with election administrators in Florida and Hawaii, he concludes, "preregistration is recommended to be best implemented as a component of a broader program of student civic education and student poll worker recruitment. Success of preregistration is maximized when election officials and educators act as partners." The Florida bill requiring election administrators and school officials to work together has the potential to serve as a model for the rest of the country as the best way to maximize voter registration opportunities under our current voter registration system. North Carolina, in enacting their own pre-registration bill earlier this year also includes a civics component. That bill takes effect in January.