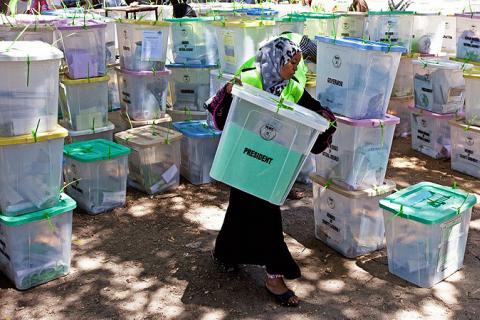 On March 30th, the Kenyan Supreme Court upheld the election of Uhuru Kenyatta to the Kenyan Presidency, dismissing claims of electoral fraud brought by his primary challenger, Raila Odinga.  While the court's decision was met with some protests and scattered reports of violence, these disturbances paled in comparison to the chaos surrounding the 2007-2008 Kenyan electoral crisis, which left over 1,000 people dead and many more injured.  The relative peace surrounding this year's contest, along with Odinga's decision to respect the court's ruling instead of calling for mass demonstrations, have led some to declare the 2013 elections a victory for Kenyan democracy.

Still, the election's results demonstrate that politics in Kenya remain highly contentious, with the electorate fracturing sharply along ethnic divides.  Despite concerted efforts to push voters away from ethnic politics and towards consideration of the candidates' résumés and policies, the largest parties in the political coalitions that nominated Kenyatta and Odinga are each closely tied to one of Kenya's largest ethnic groups.  Kenyatta is Kikuyu, while his running-mate, William Ruto, is Kalenjin.  The pair won lopsided victories in areas with majority Kikuyu and Kalenjin populations.  Odinga, who is Luo, and his running mate Stephen Kalonzo Musyoka, who is Kamba, won by wide margins in Luo and Kamba areas of the country.

These ethnic divides are more salient in Kenyan politics than any regional or ideological differences.  As the New York Times noted after this year's election, "some areas voted 95 percent for the politician from their ethnic group, while other areas, equally poor, with people in very similar circumstances, voted 95 percent in the opposite direction."  The dominance of these ethnic cleavages is reinforced by the traditional practice of Kenyan leaders rewarding their ethnic constituencies with land, import licenses, and other benefits, to the exclusion of other groups.  Though Kenyatta has billed himself as a reformer, there is little evidence that he will depart from this pattern of ethnically-based patronage politics.

Kenya's largely winner-take-all electoral system exacerbates these ethnic tensions in ways that other electoral systems might avoid.  Like many former British colonies in East Africa, most of Kenya's legislators (47 of 68 senators, and 337 of 349 members of the National Assembly) are elected through winner-take-all contests in single-member districts.  Because Kenyan counties tend to be much more ethnically and politically homogenous than Kenya as a whole (while Kenyatta received just over 50% of the vote nationally, in most districts he received either over 80% or less than 30% of the vote), minority groups in many of these districts stand little chance of ever electing representatives to the Kenyan National Assembly or Senate.

Non-competitive elections like these are a common feature of single-member district systems around the world.  Winner-take-all also often leads to distortions between the demographics of the electorate and the composition of government, as has been the case in previous Kenyan elections.  For example, in 1992 the Kenyan African National Union party (KANU) won a 53.2% majority of seats in parliament with just a 24.5% share of the popular vote.  In 1997, KANU again won a majority of the seats in parliament, this time with 38.4% of the popular vote.

Kenyans of all ethnic groups would be better served if country's newest constitution, adopted in 2010, had abandoned the British tradition of single-member districts and winner-take-all elections in favor of a multi-member district system of proportional representation.  If each Kenyan electoral district elected multiple representatives, Kenyans of ethnic groups that are in the minority in their district would still be able to have their voices heard in government, and the potential for continued distortions between the popular vote and government would be reduced.

The single transferable vote method of electing representatives in multimember districts, which FairVote refers to as choice voting, would provide Kenyan politicians with much-needed incentives to reach across ethnic divisions in order to earn high rankings from voters in other groups. This would have a moderating effect on Kenya's polarized ethnic politics, as candidates would be rewarded for broadening their appeal beyond their ethnic base. Instant runoff voting could provide similar benefits in elections for single-seat offices such as the Kenyan presidency by encouraging candidates to build broad coalitions and reach out to their opponents' supporters, potentially reducing the likelihood of future post-election violence.

The tendency of ranked choice systems and proportional representation to foster constructive dialogue and deescalate political tensions should make it an attractive choice not only in the ethnically-polarized Kenya but also in the increasingly dysfunctional and partisan political environment of the United States.