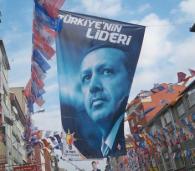 On June 12, Turkey held national elections of great significance. Turkey is a potential new member of the European Union (EU) and often cited as a model for Egypt in its moves toward democracy while balancing elections, a large Islamic population and a strong, largely secular military. The election showed both Turkey’s promise and problematic features that nations like Egypt should avoid.

The winner once again was the Justice and Development (AKP), mildly Islamist, socially conservative but economically liberal party. The AKP secured a solid majority with 326 seats out of the 550 seats of the Grand National Assembly of Turkey. Although winning by far the greatest share of votes with 49.9 percent support, the AKP fell short of earning a majority and did not receive the two-thirds of the seats necessary to unilaterally rewrite the constitution – an outcome that might have allowed Prime Minister Erdogan to transform Turkey’s polity into a presidential system, which some have suggested is indicative of Erdogan’s potentially authoritarian bent.

Years ago, many looked to the military establishment as the vanguard of secularism – well-anchored in Turkish political landscape since Atatürk’s establishment of the republic in the 1920s. Recently, however, the military’s militant secularism has allowed it to periodically intervene in frequent coups to restore order, which has cast substantial doubt on the army’s commitment to civil liberties and democracy. Prime minister Erdogan has astutely exploited this dynamic by looking to EU membership, as a way to put breaks on a less democratic military whose interventionist role the EU would not tolerate. The AKP’s embracement of a new puritanism, however, has raised questions about Turkey’s once-espoused liberalism, which seems to be threatened by a reassertion of Islamic practices from the bottom-up, championed by Erdogan. Another threat to liberalism with the consolidation of the AKP is the worrying fact that Turkey has more imprisoned journalists than almost any other country in the world, surpassing Iran and China.

Turning to the specifics of the election, Turkey’s transition to democracy has had similar challenges to Egypt’s, particularly concerns about a strong Islamist party and a history of a powerful and deeply involved military establishment. For long hailed as the only Muslim democracy, Turkey’s democratic credentials should be re-examined – as it is caught between an undemocratic military and an Islamism with illiberal tinges. Its democratic challenges are also plagued by a highly problematic form of proportional representation that wastes too many votes.

Here’s how the system works. In the Grand National Assembly of Turkey, 550 members are elected through a closed-list proportional representation system to serve 4-year terms. Candidates must be members of the Grand National Assembly supported by 20 of its members, or nominees by political parties that have attained more than 10 percent of votes in the last legislative election. The 10 percent threshold, however, does not apply to candidates running as independents- an avenue increasingly pursued by those candidates from smaller parties seeking to overcome this obstacle. What is problematic about the Turkish system is the anomalously high 10 percent threshold, which has been criticized by a Council of Europe report. The Turkish government has responded that it is designed to maintain stability. Thus, if parties do not achieve a nationwide level of support of at least 10 percent, they are unable to win any seats, regardless of their strength at the regional level. An analysis by Kerim Balci underscores additional problems with the 10 percent threshold. The system, he argues, forces a significant part of the electorate vote for their second or third options. For example, in the 2002 general elections, 45 percent of the electorate voted for parties that failed to pass the threshold.

These electoral barriers thus have had ramifications on the electoral outcome – being particularly unfriendly to small parties, as Matthew Shugart has argued in his highly informative Fruits and Vote website. What the threshold means is that it restricts the smallest party to around 50 seats at a minimum (excluding independents). Shugart goes as far as claiming that “the Turkish system is somewhere between 5 and 50 times more unfriendly to small parties than is an otherwise comparable plurality system.” Using statistical estimations, he concludes that with Turkey’s 10% threshold, the average number of parties would only be around 3. Independents, though, can win seats based on local support since the electoral system gives the opportunity for candidates who only have regional support (such as pro-Kurdish parties) to run as independents without any party, avoiding the eligibility trap. This somewhat dysfunctional electoral design thus forces those parties who can’t break the 10 percent threshold nationally to choose to run candidates as independents, circumventing the structural obstacles of such a system. Small parties that run their candidates as independents operate as though the system was the single nontransferable vote (SNTV).

It transpires that the Turkish political fabric is made up of a hegemonic ruling party (AKP) and a fragmented, atomized opposition- split between independents and the two other parties, the CHP (Republican People’s Party) and the nationalist MHP. The loophole in this electoral system is further illustrated by the growth of independents in this election. It is clear that more parties would be represented under a plurality system, highlighting the deficiencies of the way the current system is designed. Maintaining both districts and a nation-level system is confusing and cannot be justified on democratic grounds. Having a 10 percent national threshold is a way to hinder the representation of regionally concentrated ethnic or religious minorities such as Kurds in eastern and southern Turkey as well as to prevent the formation of new parties. Herein lies the problem with respect to democracy.

Nonetheless, Turkey’s election results also drew our attention to more salutary developments. The number of women in Turkey's 550-member parliament increased from 50 to 78, with 45 of them were elected on the ticket of the majority party the AKP. Also, a number of outspoken Kurdish candidates gained seats in parliament as independents. Turkey now faces the challenge of rewriting the constitution, which many contend is “inadequate for a maturing democracy,” as it was drafted under the outgoing military regime in 1980. The fact that the AKP won fewer than the 330 seats required to draft a new constitution on its own may mean that Erdogan will be more conciliatory and consensual in his approach, which might alleviate concerns by secularists about the AKP’s putative hidden Islamist authoritarian agenda. Despite phenomenal growth rates flirting with the double digits, Erdogan faces the challenge of making sure the wealth trickles down to a disgruntled youth population, as well as making the necessary judicial reforms that would make Turkey’s characterization as a democratic nation more in line with the reality on the ground.

While some analysts have pointed to Turkey as a model for the Arab nations like Egypt and Tunisia transitioning to democracy, there are obvious caveats. The abnormally high threshold  of support necessary to win seats is certainly something that should not be replicated by a nation seeking parliamentary representation of pluralism and a wide range of political opinion and interests.