What the Republican Party Could Learn from the Oscars 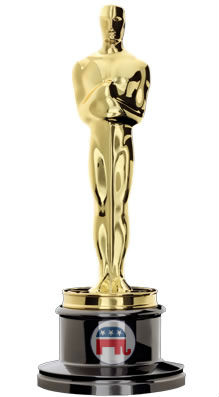 The Republican Party is holding its first presidential debate on August 6, to be televised on Fox News. Fox has decided against inviting all 17 declared presidential candidates to the main debate, and will limit inclusion to the 10 candidates with the highest average poll rating among five recent credible (if still undefined) national polls of Republican voters. The controversy over its decision points to a better way: lessons from how the Oscars came to be nominated with the fair representation (or "proportional representation") form of ranked choice voting.

With seven candidates relegated to a pre-debate forum in the afternoon -- albeit an inclusive one for which Fox recently dropped its requirement of one percent standing in the polls -- there is much controversy over criteria for inclusion. Some critics like Larry Sabato call for an expanded number of participants in at least this first debate, perhaps by randomly dividing the field into two debates to be held one after the other. Others suggest new standards to establish an even smaller field of the most credible candidates.

Cutting candidates certainly is not an easy call. Of the 17 Republicans, 14 are either a current or former governor or U.S. Senator, with two of the remaining three (Donald Trump and Ben Carson) sure to make Fox's top 10. That leaves six prominent Republicans who have won statewide and the field's only woman, businesswoman Carly Fiorina, on the sideline.

If you’re wondering why the RNC doesn’t just adopt the rules they themselves helped establish for general election debates through the Commission on Presidential Debates, it’s because those rules make no sense if you want a modicum of diversity to be heard. The Commission’s criteria for inclusion include the indefensible rule that a candidate must poll at least 15% in five different polls: a rule so strict that if applied to this Republican field, it would exclude every candidate but Donald Trump! With a rule like that, it’s no surprise that third party and independent candidates have been absent from general election debates since it was adopted in 2000. Incidentally, those interested in changing that rule so we can have really inclusive debates in the general election should take a look at the proposal from Change the Rule to include a third candidate in every debate.

Anyone who thinks the Republican debate could be effective even when including just three of the current candidates as opposed to two of them should support Change the Rule's call for changes for general election debates.

Let's return to Fox's Republican debate. As a start, consider a party's goals for debates, such as:

Applying these criteria, it's important not to have an overly majoritarian perspective in the early debates. While the ultimate nominee should reflect true majority support among party backers, these debates are a time to hear more voices within the party, not just echoes. Allowing the party's diversity of views to have time on the stage means that those backing those views have more reason to watch -- and ultimately care about and be invested in the eventual nominee.

So that means striking some ideas based on finding which 10 candidates comes closest to reflecting majority views within the party. For example, a poll could ask each respondent to select 10 candidates, and the top 10 would go to the debate. But this "winner-take-all" approach could block out important views within the party with passionate followers -- for instance, a Rand Paul or Ben Carson.

For implications for rules for debate inclusion, let's turn to people who know something about how to attract and hold an audience: the Academy of Motion Pictures, which organizes the Oscars every year to celebrate achievement in movies. Notably, eight decades ago the Academy adopted the practice for selecting all multiple nominees in all major categories with ranked choice voting (or, in wonk talk, "the single transferable vote"). Their goal was to have a system that maximized the number of Academy voters who felt they had a stake in the outcome on Oscar night - that is, the number who helped some person or movie get nominated.

Here's how their ranked choice voting system works when selecting more than one winner:

For Fox, this process would mean not relying on the mathematically-questionable task of averaging five polls that will leave some candidates out due to a tiny difference that will be far less than the polls' margins of error. Instead, they would do a single poll in which they ask respondent to rank the candidates in order of preference - asking people to rank 10 should be fine, and something most Republican voters would be ready to do at this point. We already see plenty of use of "second choice polling," as I wrote about last week with Molly Rocket. This poll would be a time to push poll respondents to think more about the candidates in a survey that was focused only on the task of identifying candidates for the debate.

After voters rank their choices, to choose ten candidates to debate, each candidate would need about 9.1% of the vote. Those who attract more would have their extra “surplus” votes go to their voters’ second choices. Then, the trailing candidates could be eliminated so that those voters could also help their second choices. At the end of the process, the ten candidates would accurately represent the viewpoints of over 90% of Republican voters.

This same ranked choice process could be used as debates proceed. If they decide to narrow who's on stage after Iowa and New Hampshire, for example, they could have Republicans living in states holding the next contests to use ranked choice voting to five debates, for example, and later on reduce the field to three or even two.

Going forward, Republicans would also be wise to use a ranked choice voting ballot in each primary and caucus to determine that contest's real winner. Guides to parliamentary procedure like Robert's Rules of Order recommend ranked choice voting when people can't vote repeatedly in person, and hundreds of significant organizations do so - including nearly every political party in Canada and the United Kingdom, such as the Labor Party's leadership contest right now.

When you establish your number of winners as one, it takes getting a majority of the vote in the final "instant runoff" round of counting to win. For example, Donald Trump would need to show he wins one-on-one against his toughest opponent to maintain his frontrunner status.

That's what the Oscars have been doing for Best Picture ever since they allowed up to 10 nominations. Instructively, they still allow a "plurality vote" when there are only five nominees in categories because it can make for good television- e.g., the "upsets" that keep people watching are almost always by a person or movie that is benefiting from a split in the majority. For Best Picture, however, the Academy decided it was more important to get the outcome right. That same calculus should govern how we vote for president, starting with large field nomination contests.

There's probably not time for Fox to change its rules for August 6, but let's hope organizers of upcoming debates find a better way to determine who's on stage. Ranked choice voting would be a good place to start.