What if the Right to Vote Started at Birth? 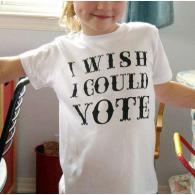 FairVote believes that voting is so important that it should be a right guaranteed to the citizens of the United States in the Constitution. Typically, as with other fundamental rights, there are some limitations on that right. The right to free speech doesn't mean that you can falsely yell "fire" in a crowded movie theater. When it comes to voting, questions arise relating to mental development/deterioration and status of incarceration.

Last month, Jonathan Bernstein raised an interesting question: at what age should we be allowed to begin voting? More specifically, should citizens be given the right to vote at birth, with our parents voting on our behalf before we're capable of making our own judgments (Bernstein suggests the ripe old age of 15 for voting on one's own)? It's certainly an interesting theory. FairVote does not endorse such a position, but we think it important to look at both sides of the issue -- grounded in the fact that if we treat voting as a right, we should only limit rights for very good reasons along the lines of free speech rights not allowing us to yell "fire" in a theater if it threatens public safety.

As Bernstein points out, we already allow parents to do other things for their children. For example, we allow parents to sign contracts for their children based on the belief that children cannot always be trusted to make the best decisions for themselves. Parents are responsible for making the right decision for their child, one that both of them will have to live with. While signing a contract only affects a small number of people, and a vote could affect the country (or at least a city, a state, or congressional district), contracts offer an interesting comparison. We generally do not deny the right to vote to the elderly who have lost cognitive ability, nor do we prevent those who are not informed on the issues from voting, although many states do prevent those deemed mentally incompetent or insane from voting. Yet, in contract law, all of these people are provided with some protections from being bound to a contract they have signed.

Furthermore, when thinking of constitutional rights, and a proposed right to vote amendment, it is interesting to think about other Constitutional rights and their age limitations. The First Amendment, our right to speech, press, and religion, is not limited by age. We don't have to reach 18 to practice religion or speak our mind. However, the right to bear arms is regulated by age. While the NRA might disagree with that stance, no state allows children of all ages to possess firearms. Therefore, even when looking to a Right to Vote Amendment, an age restriction would not be completely without precedent.

Moreover, the biggest issue that arises is that allowing a parent to vote for their child goes against the rule of one person, one vote. As Bernstein points out, however, it is not entirely contrary to that policy. The child is a person, and that child is merely having his or her vote cast by someone else. It is not as if children are not affected by elected officials. Children are citizens. Legislatures make laws concerning schools. Taxes affect children, as it is relevant to a parent's income. The Census counts them as citizens for the purposes of apportionment. Elected officials represent children, yet they don't get to vote for them.

On the other hand, people will certainly be concerned about couples having children to influence the outcome of an election. It might seem to be a preposterous idea, but people can feel awfully strong about their political party. However, even if this does happen, (which seems unlikely, given the rigors of pregnancy) it is doubtful that a large enough segment of the population would do this to have any great effect on an election.

Also, it might not seem so crazy to have a parent vote for a child when one looks at the influence of parents on their children's voting. It's no secret that parents influence their children when it comes to voting. In The American Voter by Angus Campbell, studies were shown as to how children voted based on how their parents voted. The study found that when both parents were politically active the children were between (depending on political affiliation) 71-79% the same as their parents. Even when the parents were not politically active, the children were between 66-76% similar to their parents. Now, obviously these are parents that had strong leanings one way or another, and when the parents were not consistent in their partisanship, the children were more spread out over the political spectrum. Also, in another study, simply titled Voting, there was a strong correlation found between a parent's likelihood of voting and their child's likelihood, further suggesting parental influence on child voting.

However, this issue does raise the question of who does the child put in a vote for when the parents are split themselves. Mom wants to vote for A, and Dad wants to vote for B. Then what? Marriages face enough difficulty; perhaps throwing in domestic battles over which candidate little Johnny votes for isn't the best idea.

In any event, these are among interesting questions concerning children vote from birth (or even just from 15 or 16). Few would call it the the most pressing issue concerning the right to vote, as too many potentially eligible adults are already disenfranchised. For example, those with felony convictions who have served their time are still denied their right to vote in some states. However, this is why Bernstein's article is commendable; there needs to be a national dialogue about who should vote and greater clarity that having a right means treating those questions with respect, even if seemingly "outlandish." If there is a belief by some that a person should have their vote denied, there needs to be a conversation about it. Democracy demands that we get out and voice our opinion with our vote, and if certain people are not allowed to participate in something so important to the foundation of this country, it deserves debate.

Frankly, we need to have a broader dialogue about the right to vote as a general matter. It's easy for people to claim there is a fundamental "right to vote" in the Constitution--and for the Immigration and Natural Service even to promote that belief in a citizenship test -- but the fact is that we do not have such a constitutional right to vote. So before one dismisses Bernstein's idea as "silly," we should be ready to defend practices that systematically disenfranchise Americans.