What could an independent run by Jim Webb mean for 2016?

On Tuesday, former Virginia U.S. Senator Jim Webb ended his bid for the Democratic nomination for president, while also leaving the door open for an independent run. Webb, a former Republican whose views are more conservative than many Democrats, never found momentum as a Democratic presidential candidate. He indicated his interest in running as an independent however, stating, "Poll after poll shows that a strong plurality of Americans is neither Republican nor Democrat. Overwhelmingly they're independents."

It remains to be seen whether Jim Webb will run as an independent--he said he would consider his options in the coming weeks--and it's hard to tell how much support an independent campaign could muster in the general election. It is important to note, however, that he would not have to establish too much support to have an impact on the 2016 presidential race. 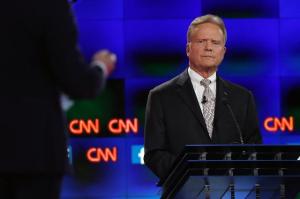 Take the simple fact that he’s from Virginia, one of the few true swing states in recent presidential elections. Since most states give all of their electoral college votes to the presidential candidate that wins a plurality (the most votes, not a majority of votes), candidates that garner a relatively small share of the electorate can have a big impact on highly competitive elections. Voters need only remember the photo-finish in 2000 in which Al Gore lost the presidency by a very small margin in a few states (most notably Florida)-- even as Green Party candidate Ralph Nader won over some would-be Democratic voters in those crucial swing states. Similarly, Republicans often lament the role Ross Perot’s independent candidacy played in Bill Clinton’s victory over incumbent George H.W. Bush in 1992.

Even a few percentage points in Virginia could prove significant in a closely contested presidential race in 2016. For example, in 2012 incumbent President Barack Obama won by only three percentage points over challenger Mitt Romney with a slight majority of 50.8 percent -- and the  state would likely have been near a dead heat if Obama and Romney had tied in the popular vote. In an even tighter race in 2014, incumbent Senator Mark Warner defeated challenger Ed Gillespie by just 0.8 percentage points, garnering only 49.2 percent of the vote. In that election, 2.5 percent of voters chose Libertarian candidate Robert Sarvis, who also won far more than the Democrat’s margin of victory in the 2013 election for governor. One could easily make a claim that had Sarvis not run, Gillespie, a Republican, would have likely captured most of that 2.5 percent and won with a majority of the vote, and Terry McAuliffe might not be governor.

When candidates can win with the most votes rather than a majority of the votes, independent and third party candidates can have a big impact on the outcome with just a couple percentage points. Should Webb run as an independent, there’s a real chance he could peel away just enough of would-be Democratic voters to change the outcome in Virginia. And given his history of appealing to some populist conservative voters, his candidacy could cut the other way and hurt the Republican nominee.

The problem isn’t Jim Webb, but rather our elected leaders who maintain a system that breaks down in elections with more than two candidates. In doing so, they are essentially playing a game of chicken with would-be candidates and voters rather than simply changing the rules to better accommodate more choice at the ballot box.

Earlier this year Virginia’s state senate backed establishing runoff elections for certain statewide races, however runoffs would force the state to hold expensive, big-money elections in the middle of the holiday season. For that reason, and because we are having more primary and general elections with more than two candidates, ranked choice voting (RCV) is gaining support across the country. It’s being used in more than a dozen U.S. cities, in Democratic and Republican internal party contests in Virginia and Utah, and will be on a statewide ballot measure in Maine in 2016. RCV allows voters to rank candidates in order of choice. That way if no candidate has a majority, the candidate with the fewest votes is eliminated, and the voters who supported that candidate have their vote instantly count for their next choice. It’s the best way to uphold the principle of majority rule in an election with more than two candidates.

It’s time to take on the structural flaws in our electoral system, rather than bury our heads in the sand. A system that allows candidates to win without a majority leaves the door open for “winners” that a majority of voters oppose. With a better electoral system, we could be talking about what issues and voters Jim Webb might bring to the presidential debate as an independent, rather than simply calculating how he might affect the outcome of the 2016 presidential race.

Try out ranked choice voting at the new FairVote-Civinomics Ranked Choice Voting App. You can vote in this year’s presidential contests and soon will be able to set up contests of your choice.