Voting Reform, for the Sports World 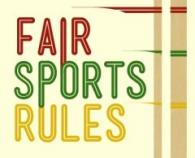 If you've visited the FairVote home page in the past year or so, you may have noticed something a little incongrous on the right sidebar: a link to a website called Fair Sports Rules. If you saw the link but were not curious enough to click, let me fill you in.

Fair Sports Rules is one of several side-projects that extend FairVote's ethos of improving fairness through structural electoral change  to non-political fields (for another example, see OscarVotes123). As the name suggests, Fair Sports Rules focuses on structural unfairness in the sports world, and proposes innovative solutions to those problems.

The original impetus for FSR was addressing the particularly salient unfairness in the selection process for playoff teams in college basketball and football. The NCAA Tournament selection process has been a source of endless controversy, and we advocate setting up a new, fully transparent committee that uses a combination of a Borda count and ranked choice voting to determine which 68 teams get to play in March Madness. Similarly, it's hard to find anyone who thinks the BCS has been an effective system for determining the best college football team in the country. FSR's plan for a 16-team playoff composed of conference champions and teams selected by ranked choice voting would be both more fair and more fun than the current four-team playoff plan.

On the Fair Sports Rules Blog, we have branched out into other sports, including baseball, tennis, soccer, and the 2012 summer Olympics. In fact, we have two new posts on the blog:

"The BCS is Finally Dead, but the College Football Playoff Leaves Much to Be Desired" by Andrew Douglas, comparing Fair Sports Rules' proposed BCS reform with the playoff structure set to go into effect next year, in the aftermath of Florida State's dramatic victory over Auburn in the final BCS National Championship Game last night.

"Should Baseball Change its MVP Voting System" by Devin McCarthy and Matt Dewilde, examining the flaws in baseball's current Borda count system and determining whether ranked choice voting would be a preferable method.

Check back regularly for more analysis of sports structures and potential reforms. And if there are any structural sports rules that have been bugging you, let us know at info@fairvote.org - we're always looking for new issues to tackle.