The most significant possible outcome for Tuesday’s election in Virginia was that the Democrats would win control of the state Senate, which would have made it easier for Governor Terry McAuliffe (D) to pass key agenda items. While the stakes in Tuesday’s Virginia elections were high, after the dust settled not much had changed.  All 122 incumbents who ran won re-election and the Democrats were thwarted in their bid for the state Senate. With only a handful of competitive races, there was little reason for most Virginians to even turn out.

Overall, Republicans maintained their supermajority in the Virginia House of Delegates, taking home 67 out of 100 House seats. Strikingly, more than two-thirds of races were uncontested. Seventy-one House seats had only one major party candidate running; and of the 33 seats Democrats won, 27 were won in the absence of any challenger (Table 1). Forty-four of the 67 seats won by Republicans were also won without opposition. Based on preliminary results, only six seats were won by less than a 10% margin, meaning that 94 percent of Virginia Delegate races were uncompetitive. Although a total of three seats changed party (mostly by narrow margins), in net, the Democrats only gained one seat from the 2011 elections. In all, the results were rather uninspiring.

In the state Senate, only 23 of 40 races were contested, meaning that 43 percent of the outcomes were guaranteed before Election Day. To take control of the state Senate, the Democrats needed to gain only one seat (to make it an even 20R - 20D, with the Democratic Lieutenant Governor breaking the tie). But they failed to do so,in part because, as the Washington Post observed, only two Senate races were thought to be toss ups that could possibly change party hands. Despite much anticipation about the outcome of the VA state Senate races, the Senate remained 21R - 19D, with no net change from the 2011 election.

With only two Senate seats hotly contested, few seats in the whole of the General Assembly that could even be considered a contest, and another predetermined supermajority in the House, the great majority of voters had no impact on the outcome. But this type of state election is nothing new in Virginia. The 2011 election was also similarly uncompetitive; with virtually the same results (67 R in the House and 20 R in the Senate, with a special January election that gave the Republicans 21 seats).

The Power of Partisanship:

In the 2015 Virginia state elections most single-winner districts were safe for one of the two parties by a large margin. And this partisanship is remarkably consistent. Partisanship, meaning the amount of Democratic or Republican voters in a district who consistently tow the party line, ensures sustained partisan control in uncompetitive and rather predictable election. It also manifests as a lot of candidates running unopposed.

Partisanship was even more indicative of the success of candidates in the state Senate elections, where every district that voted for Obama elected a Democratic candidate and every district that voted for Romney elected  a Republican. With such strong district partisanship, the results of the Virginia elections were unsurprising despite millions of dollars of campagn spending.

Are Gerrymandering and Redistricting the Real Problem?

With partisanship so predictive of outcomes, it is tempting to blame redistricting--and partisan gerrymandering-- for the chronic lack of competition in Virginia state legislative races. In an article in the Washington Post, Professor Stephen J. Farnsworth noted, “What’s really striking about the battle for control of the Virginia Senate is how few races could even plausibly be discussed as competitive. …It is a testament to the effectiveness of gerrymandering”. Quentin Kidd, director of the Wason Center at Christopher Newport University shared similar sentiments, saying: “Things are less competitive now than they used to be…  And …gerrymandering is a large part of it, and the competitiveness of any given year is going to be driven by primaries right now more than it’s going to be driven by general elections”.

But are gerrymandered districts really causing the uncompetitive, uncontested and unexciting elections so common for the Virginia General Assembly?

The real source of the problem of non-competitive elections is the inherent nature of winner-take-all voting in single-winner districts. While better redistricting practices, which take the power of drawing district lines out of the hands of the legislatures, might help produce a little more competition in districts, these practices do not make elections much more competitive or representative for voters.  In part, this is because redistricting for competitiveness is very difficult to achieve while also achieving the other primary objectives of redistricting such as compactness, respect for community boundaries, and racial group equality. But people also tend to sort themselves into similar-minded neighborhoods, in which most members of the community support the same party continually, making it almost impossible to draw districts that are competitive.

An alternative that would transform competition and representation is use of multi-winner districts and ranked choice voting (RCV). If current state legislative districts were combined into districts with three to five seats, elections would become more competitive, with more seats to win and lower thresholds for winning. More seats to run for and lower thresholds of winning also increases the number of candidates likely to run. RCV in multi-winner districts helps lessen partisan control of a district because candidates gain seats proportionally to their vote share, meaning that one party would no longer monopolize a district even if highly partisan voters continued to only vote for their party.

As an example , FairVote in 2011 drafted a multi-winner RCV plan for Virginia’s state legislature. By dividing the House of Delegates into 20 five-seat "super districts" and the state Senate into 10 four-seat districts for use with ranked choice voting, the plans ensure at least four in five voters will elect a preferred candidate. The threshold for like-minded voters to win at least one seat would be 17 percent of the vote in a five-seat house district and 20 percent in a four-seat senate district. That means fuller representation of each area's political left, center and right.

The partisanship of these districts would suggest that each party would have enough voter support to win at least two seats in nearly every district if they ran strong candidates, and third parties and independents would be better positioned to hold them accountable. While no plan can guarantee all political persuasions gain representation, multi-winner districts like those in FairVote’s 2011 Virginia plan would ensure greater representation for a greater number of people and greater diversity of representation within the major parties, including urban Republicans  and rural Democrats. 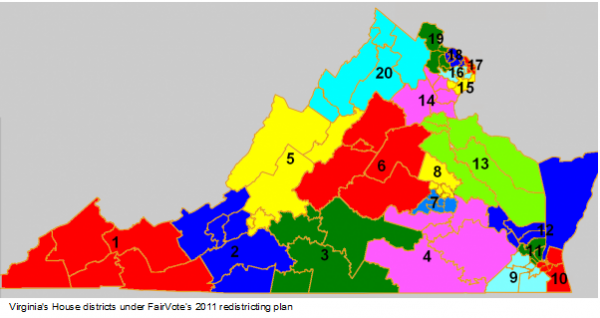