In a highly competitive election that brought over 8 thousand voters to the polls, students at the University of California at Los Angeles (UCLA) used ranked choice voting (RCV) to elect student government officials last week. With 30 candidates vying for 13 offices, these elections at California’s largest university showed that ranked choice voting can help students to elect officers that represent a broad range of voices in a large and diverse community. As in previous elections, students used the instant runoff form of RCV to elect their president and the fair representation form of RCV to elect legislators.

After 75 hours of online voting, results were announced on May 9th to an enthusiastic crowd of candidates and supporters in UCLA’s Bruin Plaza. The offices up for election included President, Internal Vice President, External Vice President, three general representatives, and others, all of whom will join the UCLA Students Association Council (or USAC) in the fall. With seven races featuring 3 or more candidates, RCV ensured that the candidate with the broadest support across campus was elected.

Devin Murphy was elected USAC President with over 50% of the active votes in the second round of counting. Under a plurality system, the presidential election would have ended in a split between three candidates, with the winner receiving just 44% of the vote. Thanks to RCV, after third-place candidate Miriam Rodriguez was eliminated in the second round of counting, Murphy’s second choice support secured him the presidency with a stronger vote of confidence from the student body.

Students at UCLA coordinate campaigns with campus organizations such as LET'S ACT! and Bruins United to run candidates, create platforms, and promote specific issues. With several organizations representing a broad spectrum of student interests, ranked choice voting plays an integral role in ensuring that USAC reflects the wide range of issues that affect the entire student body. RCV creates a more inclusive political dialogue by allowing for many different candidates to seek office while still ensuring that the winning candidate has the broadest support. Had this been a plurality election, a slate of candidates with similar platforms that represent the majority of students’ views could split their base of support and lose the election to a candidate with a much less popular platform. By eliminating the candidate with the fewest votes and recounting their ballots for the voters’ second and third choices, ranked choice voting prevents the risk of candidates losing 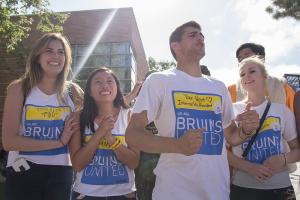 because of split votes.

According to UCLA political science professor Thomas Schwartz, RCV is a practical system for UCLA’s competitive and diverse elections. Paraphrased in an interview with The Daily Bruin, he described it as “an efficient and time-saving method for elections that involve multiple parties.” In contrast, many universities use a separate runoff election between the top two candidates, which technically ensures majority support but typically causes voter turnout to plummet. With ranked choice voting, UCLA can elect the candidate with the most support while maintaining sky-high voter turnout.

USAC’s three general representatives were elected using a form of fair representation ranked choice voting for multi-seat elections that allows more voters to help elect a candidate. With three seats up for election, any candidates with more than 25% of votes alone was automatically elected. In a three-winner race, the 25% vote share represents the "victory threshold" since only three candidates can surpass it. The tally ends after rounds of counting in which ballots are reallocated to next choices using rules designed to ensure as many voters as possible have their votes count toward representation. 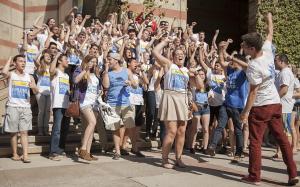 Ballots were counted over seven rounds until three strong winners emerged. If they had instead used the at-large plurality system used by most cities in the U.S., about half (and sometimes even fewer) of the voters would be represented. With RCV, over 86% of voters helped elect a candidate, ensuring that the diversity of student views will be better represented. The multi-seat form of fair representation, which is also used at schools like Harvard, Georgetown, and Oberlin, was adopted in 2007 and renewed unanimously in 2011.

In addition to USAC, the Graduate Student Association also uses ranked choice voting to represent the university’s roughly 13,000 graduate and professional students, and has recently seen voter turnout skyrocket to record levels. In total, RCV is used to elect representatives of over 42,000 students at UCLA. Since USAC adopted ranked choice voting, the number of campuses across the country using the system has grown to over 50. With students now ranking their candidates everywhere from Middlebury to Texas A&M, UCLA’s vibrant elections exemplify ranked choice voting as a way to promote fair, exciting, and inclusive elections.