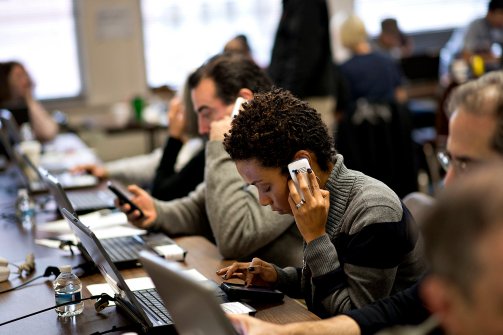 The most visible way that Democratic and Republican presidential candidates show favoritism for swing states is through public campaign events and ad spending. However, tracking where candidates open field offices is another useful method of measuring candidate attention. Field office statistics show a similarly strong bias towards swing states, although there tend to be more offices in noncompetitive states than ad spending or campaign visits.

While Barack Obama's campaign opened about three times as many campaign offices as Mitt Romney's campaign*, both showed a clear preference for swing states. Field operations are a crucial component of political campaigns: volunteers and staff on the ground persuade and track potential voters, making personalized appeals for why they should vote and for whom. For both campaigns, the voters to persuade were the voters in swing states, and they set up their offices accordingly.

President Obama's field operation was immense, with about 790 campaign offices across the country, and at least one in every state. However, in 25 states, there was just one Obama office. Conversely, the campaign opened 104 offices in Florida and 131 in Ohio. Indeed, 55% of all Obama campaign offices were in just five states: Ohio, Florida, Iowa, Wisconsin, and Colorado. 87% were in just twelve states: the twelve states in which either President Obama, Vice President Biden, Governor Romney, or Congressman Ryan held a public campaign event during peak campaign season (the end of the Democratic National Convention on September 7 to Election Day on November 6). 68% were in the eight states in which either Obama or Romney held public events during peak campaign season.

Interestingly, even though Obama did not visit four of the 12 states listed, he had rather hefty field operations in each. Although according to the Washington Post  his campaign spent less than $400,000 on advertising in Michigan between April 10 and Election Day (he spent $327 million nationwide on advertising during that period), he kept 28 field offices open in the state throughout the campaign. In Minnesota, he spent less than a million dollars on advertising, but did open 12 offices there. (It should be noted that although neither Barack Obama nor Joe Biden held a campaign event in Minnesota or Michigan during peak campaign season, both President Bill Clinton and Dr. Jill Biden attended public campaign events in Minnesota and Jill Biden attended a few in Michigan during that period).

In addition, the Obama campaign opened 54 offices each in Pennsylvania and North Carolina, widely considered to be two of the least competitive "swing states." This level of attention is somewhat surprising considering that both Obama and Biden failed to hold events there during peak campaign season. However, as we can see from the number of offices in the two states, as well as the amount of money spent on advertising -- $8.4 and 20.5 million respectively - clearly the Obama campaign considered those states to be somewhat competitive.

Romney's placement of his 284 campaign offices was equally biased toward swing states. Indeed, romney did not even open an office in every state; he only opened them in 16.

As we can see, Romney heavily prioritized the three largest, truly competitive states: Ohio, Florida, and Virginia, in which he opened about 41% of all his field offices. However, it is also evident that the Romney campaign saw opportunity in some of the states that many thought were heavily leaning towards Obama's column. Pennsylvania and Michigan, states which received few visits (five and one, respectively) or ad money ($1.74 million and zero, respectively) from his campaign, both had as many campaign offices as the slightly more competitive Wisconsin, and nearly as many as the very competitive Virginia. The Romney campaign may have been stingy with the money it spent on television advertising in those states, but clearly, it thought that those states were in play enough to allocate a good portion of their ground resources there.

While both campaigns did place the lion's share of their field offices in the most competitive swing states, each did have some offices in safe states--states about whose vote outcome there was little doubt, and that therefore received neither a campaign visit nor any ad money. For example, the Obama campaign opened 14 field offices in solidly blue California and the Romney campaign opened four offices in solidly red Utah. However, both states, along with New York and Texas, were important fundraising states.

Apart from fundraising states, field offices could be found in former battlegrounds, like New Mexico, Oregon, and Nebraska's 2nd congressional district. This may have been because these states still contained the remnants of their past political activity, such as field organizers and local volunteers who had worked in previous presidential elections. Another explanation is that these states, despite their solidly red or blue status, have slightly more balanced partisanships than other safe states. Obama only won New Mexico by ten points, and Oregon by eleven. Mitt Romney won Georgia and South Carolina, in both of which Obama opened three field offices, by only eight and eleven points respectively.

Whatever the reason for the placement of field offices in these states, we can see that people in safe states are indeed eager to get involved in political activity and to campaign for the candidate of their choice. While they cannot control where the candidates chose to visit or where their campaigns spend money, they can volunteer if the opportunity is given to them, be it in their home state or a neighboring swing state. The residents of current safe states should be given more opportunities to volunteer for their preferred candidates in their own communities, rather than being forced to travel to swing states to make a difference. With the passage of the National Popular Vote Interstate Compact, those opportunities could soon become a reality.

*It should be noted that comparing the number of Obama offices to the number of Romney offices may not be an instructive method of comparing the ground strength of the two campaigns. While Romney had fewer offices in each state than Obama, the number of offices does not necessarily measure the number of volunteers working in each office, nor does it measure how much contact each office made with potential voters. In addition, several of the Obama offices were actually the offices of their state's Democratic Party (for example, in Mississippi and Rhode Island). However, we can gauge from the large discrepancies in the numbers of offices that each campaign had in swing vs. safe states that the ground efforts in one swing state trumped nearly all the ground efforts in safe states combined.

**Numbers found on the websites of the Obama and Romney campaigns. The Obama offices can be found on each state's page under the "find your office" feature, but the Romney page is no longer active.