The Right to Vote: The case of the people of our nation's capital

On March 29th, DC Vote held an advocacy day to meet with the staff of every U.S. Senator and discuss the need for voting rights for the people of the District of Columbia. Washington, D.C, has more than a half million people, more than Wyoming. Although the District has a delegate in the U.S. House (Eleanor Holmes Norton) who can propose legislation and serve on committee, she does not have voting rights in Congress. The District lacks even a delegate in the U.S. Senate, even though Congress can veto any bill passed by the District and often considers “riders’ on bills that would change laws governing the residents of the District – a classic case of “taxation without representation.” The issue has become heated recently; Mayor of DC Vincent Gray was arrested at a protest calling for more freedom for the District to spend its own funds.

The DC Vote coalition advocated for the ability for the District’s government to use its own funds for programs they deemed necessary for the stability and growth of the District. As stated by DC Vote, “The House has passed a budget bill that would prohibit the District from spending its own funds on programs that prevent the spread of the local AIDS epidemic and help low-income women obtain safe reproductive health care.” The District's budget has been balanced for well over a decade, and the funds for such programs are available, but unusable without Congressional approval. 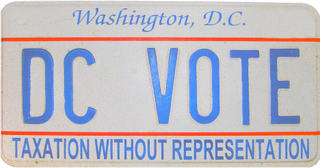 The disenfranchisement of all of the District is yet another area in the right to vote conversation. The District is home to more than 600,000 people who lack basic representation in their government. In fact, it wasn’t until the passage of the 23rd Amendment in 1961 that District's residents were allowed to vote for President of the US, despite being drafted into the US military and paying some of the highest taxes in the country.

The District has no final authority over its own budget, no direct sway in the national budget, and no vote in the consideration of federal laws they are subject to. This means that issues, like school vouchers within the District's boarders, gun control within DC, reproductive rights, and marijuana use are controlled more by representatives from South Dakota than they are by representatives from the District. Washington College law professor Jamie Raskin points out that “when congressional representation is denied, other injuries follow, such as the inability to obtain equal services and a fair share of federal resources…District residents, by virtue of their lack of political representation, have a lesser opportunity to compete for federal resources in Congress.”

Contrary to popular belief, the District is not  primarily a home for transient politicos who have no vested interest in their community. There are tens of thousands of people who were born within the the District's city limits and will live their entire lives here without ever being represented in the government that is only blocks from their front door; in fact more than 50% of the District's residents have been DC residents for longer than 20 years.

Opponents argue that the District is home to too many federal lands and buildings to be autonomous. Yet, 88% of Nevada, 68% of Utah, and 50% of California are federal lands, and all these states of course have voting representatives in Congress, including two U.S. Senators.

It is also undeniable there is a racial component to this argument; if a state, the District would be  the nation’s only majority-black state. Given that none of our 100 U.S. Senators are African American, the lack of representation for the District takes on even greater meaning.

Without a direct voice in Congress, the District cannot expect to gain control over its own affairs. Efforts have been made to rectify this wrong, but all have fallen short.

Establishing a citizenship right to vote wouldn’t guarantee that the people of the District would have representation and a fully protected right to vote, but it would require our courts to bring stricter scrutiny to the problem –and create a clearer reason for our policymakers to once and for all redress this wrong.  In the meantime, let’s ask our members of Congress to treat the District’s citizens with respect and not trample on home rule powers.