The Constitutional Right to Vote Blog 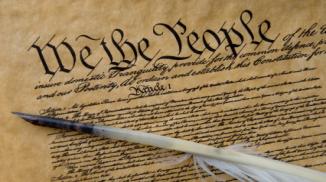 As a new democracy fellow at FairVote, I’ve been introduced to a wide range of innovative and noteworthy electoral reform and voting rights proposals. One proposal is of particular importance in the wake of a series of revelations over the past decade – revelations involving who votes, who runs our elections, and how voting rights are protected.

We must elevate the right to vote to the same standing as other fundamental democratic rights, such as freedom of speech, and freedom of assembly. Our vote is our voice. Each day brings new examples of why such protections are needed, which will be frequently chronicled in this blog.

In a country where not even half of eligible voters are likely to vote this fall, it seems counterproductive to systematically disenfranchise thousands of Americans. However, without an explicit constitutional right to vote, the marginalization of select groups of Americans by removing their ability to vote continues. As we approach November 2nd, new acts undercutting the right to vote are underway in several states. Some are very conscious. Some are just based on inefficient protocols and equipment. But all are barriers to truly respecting every vote and every vote.

In Colorado, voter registration applications for new voters are subject to a notice of disposition sent by the board of
elections after the application has processed. This disposition is mailed to whatever address the clerk has entered as the voter’s primary residence. If the notice cannot be delivered for any reason, the voter’s application to register becomes invalid and the person is unable to vote in the next election. 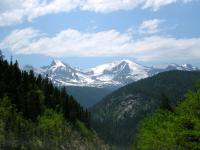 While intended to eliminate voter fraud, this practice leads to many Coloradan (some 6,000 in this election alone) who want to vote, being told they are unable. Often, the disposition cards are returned to the board of election because of a flaw in the post office, or a clerk imputing information onto the address form on computer registries inaccurately. Here, “lost in the mail” costs votes. Voters have been, and continue to be, disenfranchised in part due to the human error of others.

This week, a federal judge for Colorado declined a motion for preliminary injunction that would have allowed the Coloradans who wish to register to vote the ability to do so.  Without Election Day registration, these voters may need to wait until the next election to participate. See more about this issue

But the effects from the lack of a constitutional right to vote don’t only extend to those who are disenfranchised temporarily because of human error. As highlighted in a New York Times editorial  this week   and a recent report  by the Sentencing Project , many  live in states that permanently disenfranchise countless potential voters under  state law because of time-served on a past felony conviction . While many states are reforming laws and practices to allow people who have served felony convictions to regain the right to vote, many states still lack such fundamental reforms.  Some five million citizens are therefore eligible to vote in one state, but ineligible to vote in the state where they reside due to conflicting state laws nationwide. 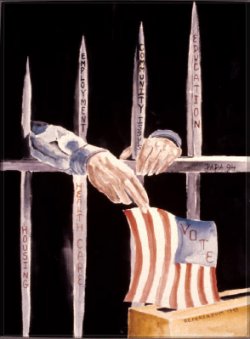 A disproportionate amount of people affected by these laws are racial minorities, leading some states like Iowa to have over 30% of their African American population ineligible to vote. Some states even erroneously (again, human error) list people with no felony convictions as former felons and expunge them from voting registries. As seen in Florida in 2000, such expunging can have serious effects on the outcomes of elections, in addition to the circumvention of individuals’ civil liberties.

Some states go as far as to only allow former felons to vote if they have no outstanding financial debt, such as child support back-payments. While the payment of child support is an important interest to many, it cannot be ethically comingled with a separate obligation and right, such as voting. The removal of a basic civil right cannot be held over the head of those with financial debt, or a slippery slope would be established where it could be foreseeable that those with outstanding mortgages or federal student loan debt could also be disenfranchised.

Some lawmakers justify these laws by suggesting that voting is a privilege. Indeed voting is a privilege. It is a responsibility. But just like other fundamental demands of a representative democracy bounded in “the consent of the governed,” voting is a right. We need to treat it that way – and take steps to ensure its protection in the U.S. Constitution.  Find out more about this issue