The Constitutional Right to Vote Blog: Felon Disenfranchisement in Iowa 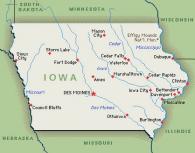 One in 44 American citizens of voting age is barred from voting. In Iowa, the Sentence Project reports that number is one in 22, due to one of the most restrictive former felon disenfranchisement laws (or “civil death” as it was originally called) in the country. Iowa is a poster child for what it means to fail to protect our right to vote in the U.S. Constitution: fundamental democratic rights can be tossed around like a political football.

In 2005, former Governor Tom Vilsack signed an executive order to reinstate voting rights to those with prior felony convictions automatically upon completion of their sentences, including any accompanying term of probation, parole or supervised release. Yet, Iowa’s new governor Terry Branstad reminds us of the harsh reality that political players make key decisions about suffrage on a state-by-state basis; On Jan. 13 , Gov. Branstad revoked the 2005  order, thereby backtracking Iowa to its old system of voting rights restoration – one that is time-consuming, confusing, and prone to arbitrary decisions by the governor’s office based on a review of each application on a case by case basis.

Iowa’s new Secretary of State Matt Schultz, a backer of the recent changes, argues it’s important to make sure people have paid all their court fees before reinstating their right to vote, hence the return to an individual review.   Yet, the right to vote should never be contingent upon the amount of money in someone’s bank account. Mixing fees repayment with the right to combines two utterly unrelated aspects of a person’s life and makes their fundamental citizenship rights bound into their financial wellbeing. Rights should not be allowed to become so entangled with personal finances and unrelated matters.

Certainly Iowa’s laws have a disturbing impact. Already, almost 25% of the state’s African American voting-age population,(significantly higher than the national average of 7.5%) are disenfranchised. If Iowa’s laws followed the laws of its surrounding states, the rate would drop to almost exactly the same as the national average.

All this serves as a further illustration of how deeply bound voting rights have become with political games. Marty Connors, Chairman of the Alabama Republican Party, was candid when asked about the topic in 2004: "As frank as I can be, we're opposed to [restoring voting rights] because felons don't tend to vote Republican."  And while Iowa Democrats (in this case) are the ones protecting voting rights, one wonders if they would have been nearly as likely to act if citizens with felony convictions tended to vote Republican.

The simple truth that Iowa is even having this debate shows how fragile the right to vote is across the Unites States. When voting rights remain tied to executive orders and the fate of mid-term elections, such fragility will continue.  Yet, voting rights should never be used as a political sledgehammer with which to bludgeon the opposing political party.

We instead should come together to agree that voting is an essential part of any citizen’s participation in their representative democracy. The neutering of that participation because of past convictions or outstanding monetary debt is against the very basis on which a government free from a ruling class of the aristocracy has been built.

Without a federal right to vote enumerated in the US Constitution , this debilitating argument will continue – voting rights expanded and taken away, with parties looking first to their self-interest and only secondarily to our democratic values. Then, and only then, will the right to vote truly be a right.

Until that time, state legislatures can act to protect voting rights. A model bill is available here.