This blog focuses on the case for establishing a right to vote in the Constitution. But when we win an affirmative right supporters of voting rights will need to keep working to protect and secure it. With Election Day 2010 tomorrow, here are examples of actions being taken right now to ensure equal and fair access to the ballot.

The DOJ seeks to provide these protections due to the Voting Rights Act 1965.  Such observers have been scattered around the country since the late 1960s to make sure the VRA is properly applied in districts. Precincts included in the observation are part of many states, such as Alaska, Arizona, California, Georgia, NJ, NM, Ohio, SD, Texas, Florida, Hawaii, Mississippi, NY, PA, and Tennessee. 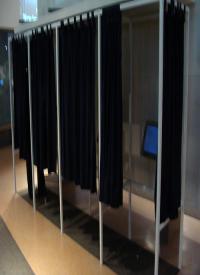 Some of the most egregious acts against voting rights have happened without any federal oversight or action (voting
machine failures, long lines, voter registration snafus, absentee ballots being mishandled…) In light of the numerous issues that can arise at a polling location, such hotlines are all vitally important – but so must be changing the Constitution to provide strict scrutiny to policies and procedures that undercut voting rights.

Also important to highlight are the efforts of tens of thousands of pollworkers, like my colleague Amy Ngai.  Others, like our intern Brian Bennett, act as partisans volunteers to alert authorities of any issues, and train others, to ensure the process will be conducted smoothly and in a fair manner. Pollworkers perform absolutely essential work, but often with few resources and limited training.  Our thanks to them and the many election officials doing their best to make democracy work -- and our hope that in the future they will have the resources, training and oversight to do their work all the better.