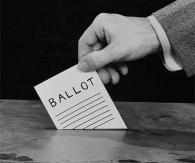 You’ve heard the assumptions: Young people vote Democratic. So do unmarried women, African Americans, city-dwellers and people with felony convictions. Church-goers vote Republican, as do rich people, small business owners and soldiers.  If you  fit into categories from each group, who knows, you may be a Libertarian or Green.

By 4th grade, most people have heard the spelling-tip about what happens when you assume traits about other people: “you make an ass out of u and me.” Yet, we keep assuming voting preferences based on age, race, religion, education and location. Many of these assumptions are said to be based on strong statistical evidence that proves people of a certain demographic are more likely to vote a particular party. This leads to politicians in their “candidate hats” to, consciously and subconsciously, ignoring broad segments of society which they see as unwinnable and outside their party’s support base.

More dangerously, however, it seems to affect what electoral laws politicians support when wearing their “hats” as policymakers. It’s heartbreaking to see both parties passing/repealing laws affecting suffrage in the name of high principle, when it’s crystal clear that they wouldn’t be taking action if they didn’t think it helped their party.

But, what if we didn’t pigeon-hole voters? What legislation would politicians propose and pass if we refused to tolerate their calculations on how electoral rules affect  their party and instead demanded that principles and voters come first? The idea that people’s fundamental rights are upheld and denied based only on the likelihood of their exercising them is a deeply disturbing thought in a nation where basic human rights are considered “unalienable” and “endowed by the creator.’ Yet the actions and words of many politicians leave little room for doubt that such denials of basic rights are occurring.

This year, it’s easy to pick on Republicans, as they’ve moved into power in many states. Here are just a few examples of new legislation and executive orders:

Yet, the Democrats deserve scrutiny as well. Do Democrats worry enough about the potential of voter fraud, however unfounded most claims of it are? Would Democrats fight for voting rights for college students, and citizens with felony convictions if they didn’t believe they would be gaining votes? Evidence from their stances on issues like redistricting would suggest many would not.

Principle seems a lot easier to fight for when it helps your side, which is why former Florida governor Charlie Crist deserves praise for putting democratic principles first. It was his sensible improvements to policies affecting people with felony convictions that Gov. Scott has overturned. Crist also signed legislation establishing voter pre-registration for 16-year-olds.

It’s time to rise above the partisan fray when enacting policies that affect our fundamental citizenship rights. In the government acknowledgment of basic civil/human rights, when did party affiliation become the barometer in which the importance of an issue is measured? Why are rights, if they are so fundamental to the workings of a free society, treated like nothing more than a political hot potato?

Some suggest that we don’t need an affirmative right to vote in the Constitution, because we already have secured voting rights without such a lengthy undertaking. But it’s these examples of the weakening of that delicate, inadequately guaranteed right that illustrate the need for something more stable - specifically codified in the Constitution to protect our ability to have a voice in government, no matter who we want to vote into office.