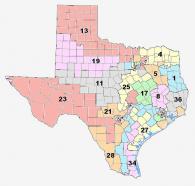 Texas has had problems with redistricting - yet again. Last week's federal court ruling that Texas's 2011 plans for congressional districts and state legislative districts had both the purpose and effect of further reducing the representation of Texas's already underrepresented racial minority populations is just the state's latest salvo in the redistricting wars. Texas has found itself in court every redistricting cycle for the past four decades - and lost every decade.

In refusing to preclear Texas's congressional plan under Section Five of the Voting Rights Act, the federal court's findings are damning. Nearly 90% of the state's population growth in the last decade was due to increases in the population of racial minorities, but none of the four new districts provided clear opportunities for racial minorities to elect candidates of choice.

No such "surgery" was performed on any Anglo-opportunity districts, although some "were redrawn to include particular country clubs and, in one case, the school belonging to the incumbent's grandchildren."

Redistricting has proven to be an ordeal for Texas for decades, with voters repeatedly forced to experience a series of shifting maps. Take the rollercoaster of the last month. In a preliminary order last fall, the federal district court imposed a new set of interim maps after indicating it expected to deny preclearance to the plan. The court's plan, however, was promptly redacted by a reversal from the United States Supreme Court. The parties agreed to a new set of interim maps while awaiting a final decision that were used in the primary and are expected to be used this fall. But those maps will change next year, at least one more time, in the wake of the latest ruling. Texas has gone through four different sets of districting maps in less than a year, and the process is far from over.

Texas's song and dance should come as no surprise to those familiar with the intersection of politics and the legal landscape surrounding districting. Section 2 of the Voting Rights Act effectively forbids states from race-based gerrymandering or adopting election methods that prevent racial minorities from having the opportunity to elect candidates of their choice. Section 5 of the Voting Rights Act prevents covered jurisdictions, like the state of Texas, from reducing that modicum of opportunities for minority representation once it has been won. At the same time, cases from the U.S. Supreme Court require that each district contain equal population and that states may not allow racial consideration to take precedence over traditional districting methods.

All of these laws do not prevent Texas from pursuing partisan gerrymanders, of course - the Supreme Court has yet to hold that partisan gerrymandering violates either the Constitution or the Voting Rights Act. When the dust has finally settled in the coming years, Texas will likely end up with a map that still has gerrymandered outcomes that over-represent Republicans, under-represent racial minorities and leave most voters without meaningful choices.

As an example, this election's interim congressional plan creates only a single district that FairVote's partisanship analysis indicates as potentially competitive, with fully 33 of 34 incumbents projected to win by landslide margins of at least 20%. Republicans are favored to win 25 of 36 seats in a state where Barack Obama will likely win more than 40% of the vote. Racial minorities do gain opportunities to elect candidates of choice in three districts (far more than in the plan that the court refused to preclear), but still fewer than half of racial minority voters will live in district with the voting power that guarantees them the ability to elect a candidate of their choice.

Such problems associated with representation and voter choice are inherent when jurisdictions use single-seat, winner-take-all districts. Winner-take-all districts make representation of voters in the minority all but impossible when they make up less than 50% of a district. At its extreme, a minority group or other interest that makes up just under 50% of the vote in every district might not win any representation at all. As a result, the power over representation can shift from voters to those in control of redistricting. State legislators gain a tool to help their political friends and hurt their enemies at the expense of voters' choices.

That's why even after Texas finally resolves its maps, with a new plan to be drawn in 2013 after this year's elections, it's all too likely that the state's racial minority voters - and indeed most everyone who isn't a white Republican - are unlikely to get anything resembling proportional representation in the Texas legislature. Even if they did, it would require the creation of mostly non-competitive districts in which voting becomes a formality, not a meaningful way for voters to define their representation.

A far better solution is some form of more proportional representation - what FairVote calls "fair voting" in its new Fair Voting 2012 report for which we have drawn plans for modest, American forms of proportional voting in states across the nation. One example is choice voting, a candidate-based system that has been used in several U.S. cities. Voters would rank candidates in order of their preferences in elections competing for between three and five seats in larger legislative districts. Larger districts would allow for more compactness, and the use of choice voting would allow most voters to help elect a favorite candidate no matter how mapmakers try to engineer outcomes. Fewer districts mean fewer battles over redistricting. Greater opportunities for representation from a diversity of viewpoints means fewer causes for litigation.

Our Fair Voting 2012 reports show exactly how such plans could work for Texas and every other state in the country for U.S. House elections. The Texas plan creates eight large districts. Every single district is competitive, granting everyone the opportunity to get the representation they deserve. Further, overall representation of voters, both in terms of party and racial group, would almost certainly be an accurate reflection of the state's electorate. Fair voting could simplify redistricting and remove the need for judicial intervention into a state's plan - and finally take Texas out of the redistricting wars.