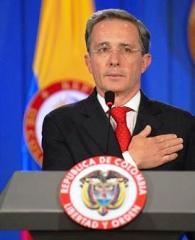 A couple of weeks ago, the Colombian Constitutional Court rejected legislation calling for a constitutional referendum on whether presidential term limits should be increased from two to three terms. This decision prevented President Alvaro Uribe from running for a third straight term in office and sent a strong signal to the international community: the burgeoning Colombian democracy won’t be part of the autocratic wave in South America.

Uribe was first elected in 2002 for a non-renewable four-year term. In 2005, he won a constitutional amendment extending the term limit from one to two terms, which enabled him to successfully run for reelection in 2006. After eight years as President, he still retains very high approval ratings and was leaving open the possibility of running again for the presidency in May 2010 despite the Constitution’s two-term limit.

Both the Colombian Senate and House of Representatives had overwhelmingly approved in 2009 the bill authorizing a referendum on presidential term limits. It stated, “Whoever has been elected president of the republic for two constitutional terms can be elected solely for one other term.”

The final step before the proposed constitutional reform could be put to a popular vote was to get approval from the national Constitutional Court. And the Court fully played its role of ultimate institutional shield by ruling 7 to 2 against it. The decision was founded on irregularities in the process of passing the referendum. Consequently, President Uribe is not running for a third term.

This is how Colombia distinguishes itself, in an encouraging way, from its neighbors such as Venezuela, where Hugo Chavez recently undermined democracy by using his authority as president to change the Venezuelan Constitution to become president-for-life.

Uribe is exceptionally popular thanks to successful security policies against terrorism and drug cartels. As a result, if he had been allowed to run again, he would most likely have been reelected. However, a third term would have inevitably damaged the integrity of the Colombian institutions, established under the 1991 Constitution. Being in office for 12 years would have enabled Uribe to permanently alter Colombia’s institutional checks and balances by appointing most of the Constitutional Court and the Top Generals.

By confirming the current presidential term limit, the Constitutional Court showed a sign of institutional stability and democratic progress. Colombia, which is holding parliamentary elections this month, and presidential elections in May, is indeed on its way towards a strengthened democratic state and teaches a tremendous lesson about democracy: no one is irreplaceable to lead a country and the renewal of politicians ultimately revitalizes the country by putting new life into politics.

Our FairVote intern Maxine Katz contributed to this post.