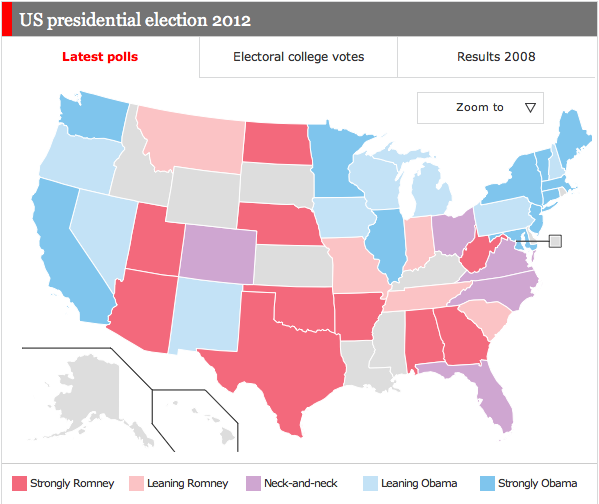 Image courtesy of The Economist

Barack Obama: the President is making his way up the west coast for fundraising events. On Tuesday morning he will travel from San Francisco to Portland, and will then spend the night in Seattle after a fundraising at private homes.  Meanwhile, First Lady Michelle Obama is covering ground in swing state Ohio, where she will be campaigning to grassroots supporters.

According to the Economist's interactive map showing the latest polling data for the presidential election, there are only five true swing states: Florida, Ohio, Colorado, Virginia and North Carolina.

Candidates will spend more money on undecided voters than ever before, now that the pool of such voters has shrunk considerably since the past two elections. According to the Washington Post's calculations, "if $3 billion is spent on the election [...] and only 6 percent of the electorate is really willing to change its mind, that means roughly $400 will be spent trying to persuade each of those voters."

According to the Huffington Post's analysis, there are over twelve million unregistered Latino voters in ten swing states. If enough eligible Latinos register to vote, new swing states could emerge, red states could become blue states, and we can expect campaigns to respond accordingly.

In Swing States, Economic Picture a Little Brighter for Obama

The Washington Post reports that five out of the eight "truest" swing states (Iowa, Ohio, New Hampshire, Virginia and Wisconsin) have unemployment rates below the national average. This downward trend could convince undecided swing state voters to vote for Obama.

Can Maine Find Political Relevance Before the Presidential Election in November?

Maine doesn't usually get much campaign attention, but that could change, because unlike most states Maine can split its electors if the majority of voters in separate districts support different candidates. As a result, "national campaigns also consider how much proverbial bang for their buck they can get by buying TV airtime for ads in that district relative to other districts. Maine's 2nd District happens to be in an exceptionally cheap and easy media market [...] So the Romney and Obama campaigns may calculate that the relatively low investment is worth the opportunity to snag even just one electoral vote."

Presidential candidates only visit Oregon--not a swing state--for fundraising purposes, not for campaigning. Given that "this isn't so much a national campaign as an Ohio-Virginia playoff," this story suggests a national popular vote as a solution to that unfairness.