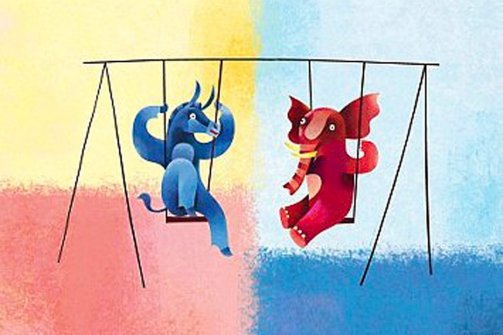 Image courtesy of The Daily Beast

Barack Obama: After a brief post-bus tour return to Ohio on Monday promoting his economic policies and bashing Romney for Bain Capital outsourcing, the President will spend today in Texas fundraising in San Antonio and Austin hoping to raise money from gay and Latino voters.

Mitt Romney: Governor Romney will spend today in swing state Pennsylvania, where he will accuse Obama of cronyism, citing federal grants and loan guarantees given to pro-Obama alternative energy companies.

Will Fairfax County Determine the Next President?

This Washington Post story cites a Forbes analyst who argues, "Although Ohio and Florida are often seen as crucial swing states in the electoral count, Obama could lose both of those states and still win the election by carrying Virginia's 13 electoral votes. And the half-million votes of Fairfax County could push Virginia in either direction."

Why New Swing State Of Virginia May Determine Presidency

Virginia is becoming perhaps the most important battleground state, and the candidates' visits to the state prove it: after Obama made a two-day campaign visit to Virginia, Romney sent former New York Mayor Rudy Giuliani to Virginia to counterattack on Friday.

Why Obama May Be Safe in Virginia

Virginia might be the most important swing state this election, and this Atlantic story predicts Obama can win it for a number of reasons: Virginia has a low unemployment rate, many young voters, and a growing number of minorities--particularly African Americans--who will vote for Obama.

Inside the Statehouse: Candidates Better Remember - It's the Economy Stupid

According to this Florida-based paper, the economy is the primary issue this election: "Whichever candidate prevails in Florida, Ohio, Colorado, Missouri, North Carolina and Virginia will capture the White House. The contests in these states will hinge on one issue, the economy." Furthermore, this reporter says winning the Hispanic vote is the second most important factor for a presidential win.

Paul Begala on the Swing Voters Who Will Pick the President

Newsweek reports: "We can almost guarantee that 48 percent of each state's voters will go for Obama, and another 48 percent will decide for Romney. And so the whole shootin' match comes down to around 4 percent of the voters in six states. I did the math so you won't have to. Four percent of the presidential vote in Virginia, Florida, Ohio, Iowa, New Mexico, and Colorado is 916,643 people. That's it." Begala also calculates that the candidates spend  $2,181.87 campaigning to each of those voters!

According to the Boston Globe, Obama has spent almost $100 million on television ads in swing states, more than one-fifth of which was spent in Ohio.  That pales in comparison to Romney, whose campaign has spent four times that amount on television ads.

Washington State is not a battlefield. It's almost a sure win for Obama, as the state hasn't given a majority of votes to a Republican presidential candidate since Reagan ran. As a result, "Obama takes the state for granted and Romney sees it as a waste of time."

Obama, in Return to Ohio Battleground, Will Keep Up Attacks on Romney

Shortly after his bus tour of Ohio, President Obama returned to the battleground state Monday to remind middle-class voters of his job-saving auto industry bailout and to attack Romney as an outsourcer.

According to this story, North Carolina remains a battleground state, as Obama is either tied or even ahead of Romney in that state.

What Does it Feel Like to be a Swing State Voter?

PBS has created a montage of the ads--which are mostly negative--aired in Virginia one day in June to show non-swing state voters the kind of attention they, too, could get if they voted in a state that mattered. Keep an eye out for a new series PBS is working on called "Battleground Diaries."

If Obama and Romney Tie in the Electoral College, Then What?

This article underscores the pressing need for a National Popular Vote, as the House would choose our next president in the case of an Electoral College tie.