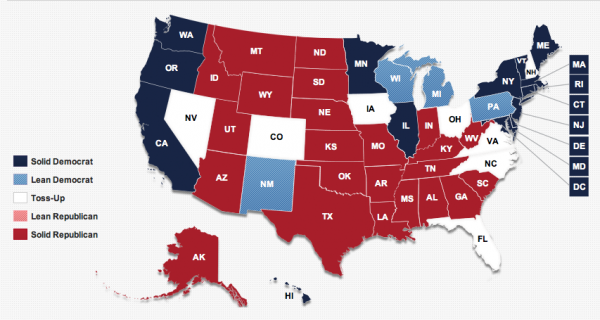 Barack Obama: Today the President is campaigning in Iowa; it is his second campaign stint in the swing state this year. He spent the morning with the McLaughlin family in Cedar Rapids to campaign for his proposed tax cut extensions. In the afternoon, he will speak about the economy at Kirkwood Community College, also in Cedar Rapids. Later this week Obama will head to Ohio and Pennsylvania for his "Betting on America" swing state bus tour.

Mitt Romney: Governor Romney is campaigning at a town hall meeting in Grand Junction, Colorado. Tomorrow he will address the NAACP national convention in Houston, Texas.

Swing States Poll: Amid Barrage of Ads, Obama has Edge

According to a new USA TODAY/Gallup Poll, "an overwhelming majority of [swing state] voters remember seeing campaign ads over the past month; most voters in other states say they haven't."

The Post reports that Romney and Obama are tied at 47% in the polls, a fact that not only "underscores polarization" but will also put greater pressure on campaigns in key swing states.

According to Bloomberg data, the number of independents in swing states Colorado, Florida, Iowa, Nevada, New Hampshire and North Carolina has increased by about 443,000 since 2008, which is significant because "most elections are about the center and that's where the swing vote is going to come from."

Obama Heading Back to Campaign Trail

"Ohio may be the premier swing state. No Republican has ever made it to the White House without carrying Ohio and no Democratic candidate since John F. Kennedy in 1960. Obama has scheduled stops Thursday in the northern Ohio cities of Maumee, Sandusky and Parma," this Seattle paper reports.

This story indicates that in Virginia, Florida and North Carolina-swing states where Obama has lost ground among white, moderate voters-the President's reelection bid could hinge on the black female vote.

If the Pundits Say It, It Must Be True

Now that Missouri leans Republican, it is no longer a swing state, and is therefore "consigned to irrelevance," says a Kansas City reporter.