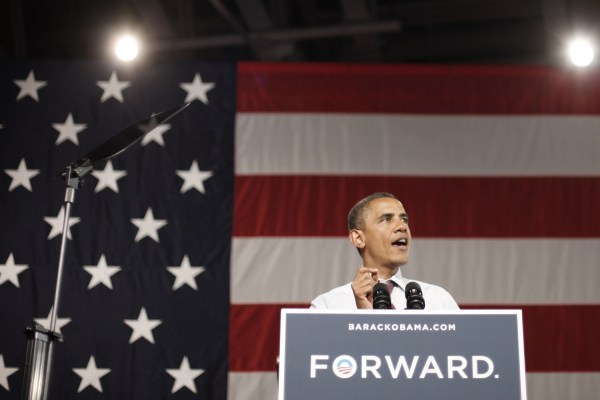 Barack Obama: the President spent last week primarily in the swing states, campaigning in Ohio on Wednesday and Florida and Virginia on Thursday. He also attended a fundraiser in New York last Monday and is speaking at a campaign event in Connecticut today.

Mitt Romney: Governor Romney returned from his international tour to Britain, Israel, and Poland last week. On his arrival back in the US, he hosted a campaign event and a fundraiser in Colorado on Thursday and did the same in Nevada the following day.

Jewish Republicans like Sheldon Adelson have contributed enormous amounts of money to pro-Romney Super PACs in swing states, but the National Jewish Democratic Council is responding with its own swing state-focused advertising blitz.

In the "not so farfetched" event of an Electoral College tie, the House of Representatives determines the Presidency--meaning the win would go to Romney, as Republicans dominate the House. CNN predicts this event could "would set off a wave of constitutional and political mayhem."

Missouri Slipping Away From Democrats

The number of swing states is further shrinking, as it seems Missouri is may be out of play. As a result, Obama and Romney are likely to decrease the amount of money and resources they devote to the state.

As U.S. Naval Academy political scientist Brendan Doherty argues, presidents of both parties tend to spend more time in swing states throughout their terms in office, not just in re-election years. Both George W. Bush and Obama have spent a disproportionate amount of time visiting swing states.

Texas on sidelines in fight for swing states

Texas Republicans are feeling marginalized this election year. Unless the Republican presidential candidate has close ties to Texas, as both George W. Bush and his father did, the Electoral College renders the strongly-Republican Texas strategically unimportant. This neglect has manifested itself in Texas Republicans being given a hotel distant from the Republican National Convention in Tampa Bay.

Obama's campaign strategy is focused almost exclusively on maintaining his popularity in swing states, encouraged by recent polls showing that he is performing disproportionately better in those battleground states. Obama has "blanketed swing states" with his campaign advertisements, while Romney has been more aloof.