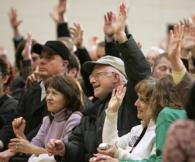 The Democratic National Committee's Change Commission, charged with finding ways to improve and reform the party's presidential nomination process, has released its recommendations, and while they are not nearly as sweeping as we would prefer, there is one particular change that will further democratize the process--should the party adopt the recommendations.

First, the good news: Superdelegates would be far less super, in the sense that they would no longer be able to sway the nomination on their own. The commission recommended that party leaders and elected officials who as of now serve as unpledged delegates lose the "un-" prefix. Instead, these folks' votes would be allocated to candidates proportionally based on results in their respective states (not winner-take-all as some have reported). Yes, you're correct, this would make them just like regular delegates, except that by virtue of their station they get a guaranteed vote. A vote they can't make an independent decision on, and therefore cannot thwart the will of the Democratic electorate, but a vote nonetheless. It's a genuine improvement, and I presume keeps some party big cheeses appeased.

Then there's the this-might-be-big news: Delegates formerly known as super will not be distributed artificially among the states, so if your state is full of Democratic elected officials, congratulations! You now have more heft in the nomination process. That's a boon for, say, DC, and maybe not so much for a state like Utah (assuming they're terribly concerned about the Democratic presidential nominee there).

Next, the not-great-but-not-bad news: The commission is recommending a shrunken calendar, precisely defined as to when states can hold contests. No one gets to go before February 1, which at least avoids a Christmas-with-the-candidates scenario. But this brings us to the bad news.

The bad news is that there remains an officially sanctioned time when the usual handful of small states gets to enjoy the spotlight; between February 1 and March 1, only Iowa, New Hampshire, Nevada and South Carolina may hold contests. This is not a change, but a codification of what happens anyway in a less-official way. And as is the case now, it's difficult to see how this would be enforceable should, say, Wyoming decide that it's not going to take this lying down and jump to January 31.

We would much prefer a situation in which states rotate within the calendar from cycle to cycle, with the size of the voter pool increasing with each set of contests, such as in the FairVote-backed American Plan for presidential nominations. And that, perhaps, is the biggest disappointment from our perspective--no meaningful structural improvement to the nomination process. While we applaud the commission for reining in some of the excesses and giving more power to the electorate over party insiders, it would have been a much bigger deal had there been a fundamental change to the mechanisms of nomination themselves.

But that's why we're here, of course. We'll keep making our case to bring more fairness and sanity to the nomination process. The Change Commission's recommendations are not a panacea we might wish for, but it's a step in the right direction.