Stamp Out Democracy on the Cheap 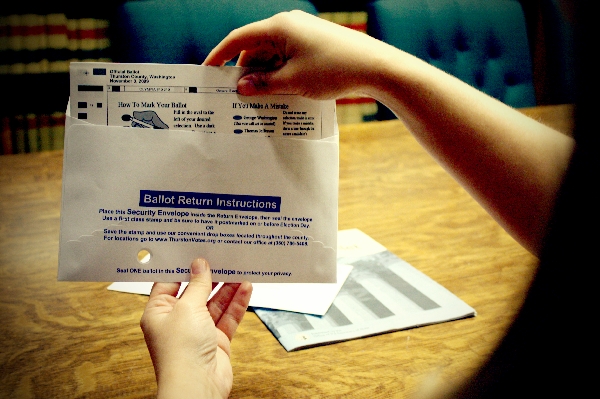 One first class stamp: 45 cents. One extra ounce to ship: 20 cents. Voting in a democracy: priceless.

Elections are expensive. States must cover the costs of voter registration, identification, access and education, provisional ballots, voting technology and audits. With all the expenses associated with elections administration, many states and local government are examining their shrinking budgets and looking to tighten their belts. Unfortunately, in the haze of cost-cutting fervor, some states are neglecting important democratic principles with the aim of running democracy on the cheap. And nationally, we let them get away with it.

In too many states, the government does not subsidize vote-by-mail return postage but rather passes the costs along to voters. This policy, enacted to save a dime, carries hidden costs, which are extracted from the democratic process.

Here are four major reasons why the government should subsidize vote-by-mail ballots: 1) arguably, paying for your ballot's postage is a poll tax; 2) some counties may understandably accept ballots being returned without sufficient postage, but if others in the same state do not, there are issues involving equal protection; 3) the necessity for additional postage is not always clear, causing some ballots to be lost in delivery or late for arrival; 4) voting-by-mail reduces states' election costs and should therefore be encouraged.

Poll Tax: Though outlawed by the 24th Amendment, vote-by-mail postage is a form of poll tax - especially if it's unrealistic for the voter to have the option to drop off their ballot in person, as is the case for people living far from polling sites or out of state. Paying for ballot postage is an expense charged by a federal agency (the postal service) and levied disproportionately against some of America's most vulnerable citizens: seniors and citizens with disabilities. While the government subsidizes junk-mail with lower rates, voters must often pay to mail in their ballots.

Equal Protection: We have heard that policies in states can differ from county to county on whether to accept voters' ballots that lack sufficient postage. We applaud those offices that will cover these minor costs, but it raises issues of equal protection under the laws if other counties are refusing to accept such ballots.

Ambiguous Costs Are Confusing: Instructions are not always clear on how much postage is needed to mail a ballot, which can lead to ballots being lost in delivery or late for arrival. Depending on the city, county and state, in which you live, your ballot may cost more to ship due to the ballot's length, which affects its weight and thus shipping costs. Additional postage is often needed, which can be confusing, especially to first-time voters. My colleague Rob Richie's daughter is a first-time voter this year and reached out to him for advice because the instructions on her absentee ballot said "extra postage may be required" - and she doesn't live near a post office, further complicating the situation. Richie instructed her on how to make sure her ballot is mailed properly, but not everyone is related to the director of a nonprofit that works on voting issues.

Cutting Costs: Voting by mail can save costs on Election Day for cities and counties. Though vote-by-mail should never take the place of traditional polling places, it can effectively lower the costs of polling stations on Election Day. With fewer citizens coming to the polls in person, fewer resources are needed to accommodate their ability to vote. Meaning, localities are saving costs of printed materials, rental equipment and poll workers. Why then should governments seek additional savings from the voters responsible for the saved expenses?

In the end, voting should be a simple and secure process. Voters should not be required to pay a federal agency to cast a ballot nor worry whether they put enough postage on the envelope. Likewise, if our government wants save on democracy, it should encourage less expensive voting methods, rather than discouraging it by passing the costs of those methods along to voters.

***FairVote's new Promote Our Vote initiative is designed to be a catalyst for a right to vote movement grounded in the vision of a right to vote in the Constitution, but also in practical details that show a city, state or nation's commitment to suffrage. Let's stamp out the idea that democracy can be run on the cheap!