Special Elections: A "Mandate" from the 4% 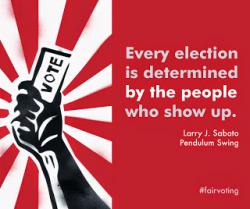 Throughout the United States, there are numerous special elections held to fill vacant seats in local, state, and federal offices. Recently, while discussing the District of Columbia Ward 4 and Ward 8 special election results, a friend remarked that she was unaware there was an election in the District. While most Americans have the second Tuesday after the first Monday in November ingrained in their brains as Election Day, the dates for special elections are set by local/regional boards of elections and can vary greatly.

The result? Low turnout and a less representative government.

Growing up I learned the value of participating in the democratic process from my grandfather. He emigrated from Honduras in the 1930s and cherished being a United States citizen and all that entailed. This is a trademark of my family. We regularly have lively discussions about politics (even at the dinner table!) that continually shape our opinions about critical issues impacting our community, our country, and the world.

I am a voter in Ward 4. Many of the candidates in my ward had unique ideas, but do they represent the interests of the population? There were 13 candidates running: 12 Democrats and 1 Socialist Worker Party member. While an overwhelming majority of Ward 4 voters are registered Democrats (79.69%) the remaining 20% of voters are unlikely to have their voices heard and their views represented in this slate of candidates. Sadly, without candidates that reflect their interests, voters have little reason to turn out on election day.

In many cases, less that 50% of the population elects leaders for our government. Is this the way democracy is supposed to work?

It isn't just the relatively low shares of the vote for the winners that troubles me. It’s the lack of engagement by candidates. From my perspective, candidates weren't working hard enough for my vote -- no knocks on my door, no individual engagement, no request to put a yard sign on my lawn — even though I'm a regular voter.

There are a number of key reforms that can address low voter turnout and it all centers on fair, equitable voting. Using a fair voting system - like ranked choice voting - allows voters to express their preferences and create representative bodies in government. Even in a single seat election, the use of ranked choice voting enables candidates to build bridges across political ideologies, addresses issues that impact citizens, and incentives knocking on doors to ask to be a first, second, or third choice.

Maximizing the voices of voters and giving winning candidate’s a clear mandate from a broad range of constituents — now that sounds like democracy.