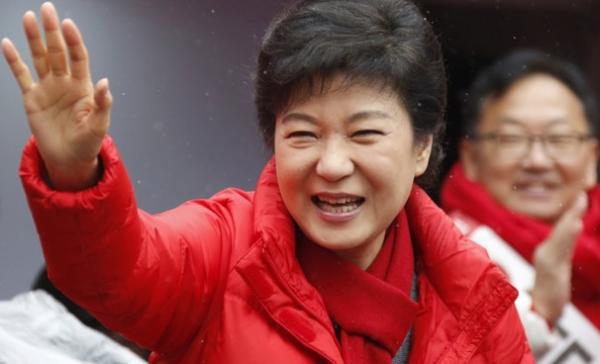 Women world leaders enhanced their numbers this month, as Park Geun-Hye of South Korea joined the current 13 female presidents and premiers on Wednesday, Dec. 19. Park was elected directly with 51.66 percent of the vote, while her party, the New Frontier Party (NFP), took 152 of the 299 seats in the National Assembly.

Park will be South Korea’s first female president and the first female leader in northern Asia. Her election marks a breakthrough for a country that ranks 108th of 135 nations for gender equality and a region known more for patriarchal succession than gender balance in politics.

Most election analysts place emphasis on Park’s family name over her gender. As the daughter of Korea’s former general and leader Park Chung-Hee, name recognition clearly bolstered Park’s campaign. Park Chung-Hee is a polarizing figure in Korea; he is revered by some as an economic savior and reviled by others as a dictator. Much of his popularity is derived from older Koreans who see his reign as a time of stability and economic growth. Like father, like daughter, Park found significant support among elderly conservative voters who believe she embodies her father’s leadership qualities and sympathize with her due to the assassinations of her mother and father.

Conversely, her gender played a more complicated and ambiguous role in Korea’s presidential election. From the beginning of the campaign, gender was made a central issue. Park promised to help women if elected by boosting financial aid for childcare, offering incentives for firms that hire women and establishing a quota for political parties, requiring them to reserve 40 percent of election candidate nominations for women. Park’s party labeled her the “Prepared Female Candidate”, a slogan rarely absent from her campaign posters and speeches. Opponents critiqued the NFP’s new appreciation of women as opportunistic; the party is routinely admonished for members making sexist comments.

Despite her campaign’s heavy focus on women, controversy arose over whether Park is actually a feminist or utilized her gender as a means to power. Many Korean women’s advocates, such as Kim Eun-Ju, executive director of the Centre for Korean Women and Politics, find Park’s promises inconsistent with her record.

“For the past 15 years, Park has shown little visible effort to help women in politics or anywhere else as a policymaker," Kim told the French Press Agency. Others see her election as a means of breaking the glass ceiling. Even Kim concedes that having a female leader may change the chauvinist attitudes of senior officials in the NFP who are mainly male.

Like many women politicians, Parks was demonized for being too feminine and not feminine enough. One sexist rant by the spokesman of her opponent, presidential candidate Moon Jae-in, took aim at Park for never marrying or having children. He asserted, ''Candidate Park has no femininity. She has never lived a life agonizing over childbirth, childcare, education and grocery prices.'' This statement may have been in response to Parks playing to sexual stereotypes by promising motherly female leadership if she were to win, as opposed to good leadership without the gender connotation.

The Korean election brings to light an unfortunate reality for female candidates; in almost all cases, women candidates must address their gender by mitigating its impact and/or claiming it as an asset. To the contrary, a male candidate is never expected to explain why he is capable, despite his gender. In politics, being male is the standard. If a candidate does not meet that standard, an explanation is needed.  With 13 female world leaders, soon to be 14, one must wonder how much ground must be covered before the issue of gender becomes a nonissue?