Redistricting ensures that political district lines reflect population changes in the U.S. Census every ten years so that each district has the same number of voters per seat in a district.  South Carolina is in the midst of redistricting and, as with most states, it’s become complicated and increasingly controversial and partisan. As explained in our recent post on Michigan, FairVote proposes an alternative to the winner-take-all system that has plagued the redistricting process, and opened it up to gerrymandering, partisan bickering, and opportunism. Moving to multi-member “super districts” with proportional voting would make the process of fair representation much smoother and insulated from the gerrymandering that is such an affront to democracy.

Here are the latest developments in South Carolina. As a result of a population increase in the last decade in the state of South Carolina, the state gained a new seat. The House decided to redraw the legislative lines to add the seventh congressional district to the state in the Low country, running along the North Carolina border. The plan has been rife with controversy, however.

According to Dick Harpootlian, chairman of the S.C. Democratic Party, the party will dispute the proposed new maps in court, on the grounds that incumbent congressman’s majority-minority district was packed with an excessive number of African American voters. The lawsuit seeks to move some African-American voters out of Clyburn's majority-black district to avoid what critics argue is a form of resegregation. On the flip side, other supporters of minority voting rights have argued that South Carolina can and should create a second black-majority district.

But despite racial dynamics being salient in this debate, one of the main controversies has been exactly where this seventh district would be created. With Republicans in control of both chambers of the state legislature, it is expected that the newly created district will be drawn to favor Republicans, but the House and Senate each have drawn their own plan. Senate Republicans want the new district in the state’s south, in Beaufort County, while the House wants the new congressional district in the northeast part of the state.

While public hearings have been scheduled for both chambers of the General Assembly to agree on a congressional redistricting compromise plan, which would then go to Governor Haley for approval or veto, the state House has passed H 3992 on June 29, amended and passed in the state Senate, and now it is back before the House, with both maps still being debated on the table. The redistricting battle is set to be resolved when lawmakers will gather in Columbia, S.C. on July 26 to vote one last time on one of the maps.

Democrats, however, seem to be hoping for a deadlock in the state legislature, since that would mean the line-drawing would be under the responsibility of a three-judge panel (two of them appointed by President Obama) – which Republicans are finding increasingly risky, “a nightmare scenario”, according to the Washington Post’s Aaron Blake.

A Way to Put Voters First

The internal conflict within the Republican Party, Democratic Party complaints, and the adverse impacts proposed plans might have on African American voters leads us to put forward alternatives to the single-member, winner-take-all way of designing redistricting – and put the voters in charge.

So what should South Carolina do to resolve these contentions? We need to replace winner-take-all elections that disadvantage those in the minority with geographically compact “super districts.” In each super district, several representatives would be elected with a proportional voting system like choice voting.

Under our proposed plan, South Carolina would be divided into two super-districts, with four seats and three seats, respectively, in which a proportional system such as choice voting or cumulative voting (as backed over the years by Congressman Clyburn) would be endorsed.

To create and evaluate these super districts, we entered data from the seven congressional districts as proposed by Matthew Kuhn, a student of Professor Nathaniel Persily’s Redistricting and Gerrymandering course at Columbia (part of the DrawCongress project). We did not have data on the projected partisanship, but the racial data is revealing for the increased power that proportional voting gives to all voters.

Here’s our proposed plan, based on Matthew Kuhn’s proposed map: 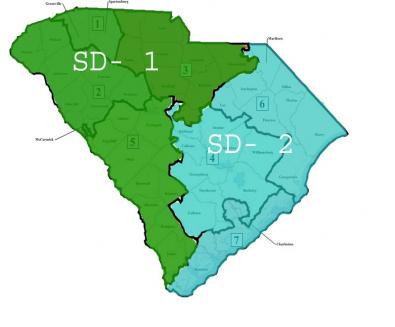 This is the data from Matthew Kuh's DrawCongress project, which was used as a building block to create our super districts: Partisan Analysis: Backers of both major parties would be certain to have the power to elect at least one candidate of choice and every election would be competitive. We don’t have partisan information to be able to evaluate the chances of each party to win more than one seat in each of the districts, but given the state’s overall partisan lean, Republicans would likely be favored to win two seats in the three-seat district and at least two seats in the four-seat district

Voting Rights Analysis: With FairVote’s proposed plan, African Americans voters would have the power to elect two candidates, assuming they have shared preferences for representation. In contrast, Kuhn’s Draw Congress plan only allows for one  black-majority district – the next-highest district for African American population is only 31% black. The plans under consideration in the South Carolina legislature also would put African Americans near or above a majority threshold in only one district. Women also would have more chances to break through in a state with an all-male congressional delegation. (Note: South Carolina currently has two African American U.S. House Members, James Clyburn (D) and Tim Scott (R). But voting rights power is not about outcome – it’s about the power of like-minded voters to elect a candidate of their choice, no matter what raced or gender.)

Using a proportional voting system would clearly give voters more choices in every election. Every Republican voter and every Democratic voter would likely be pleased with at least one of the winning candidates in their district, and nearly every white voter and nearly every African American voter would similarly be pleased. When compared to a single-member district system, a proportional voting system relieves us of our democratic deficit. It's a matter of voter equality.