Snowe-ball Effect: How the Loss of Yet another Congressional Moderate Makes the Case for Election Reform 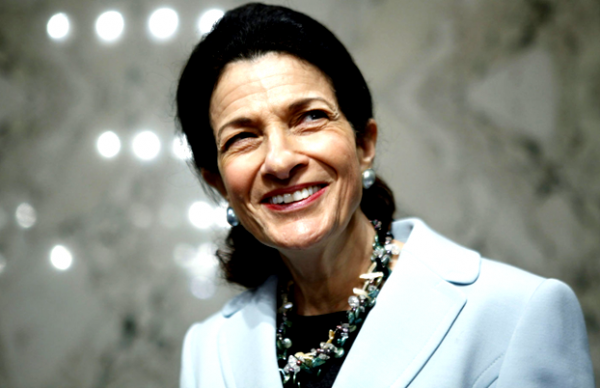 The Senate’s Moderates under Assault as Polarization and Partisanship Increase

Admonishing the U.S. Senate for “dysfunction and political polarization,” Senator Olympia Snowe (R-ME), who throughout her career often received praise for eschewing party orthodoxy and embracing bipartisanship, announced on March 1 that she would not stand for a fourth term. In explaining her decision, Snowe wrote that her unique brand of moderation no longer fit an institution in which ideologues, laboring to “block the other side” and demanding reflexive fealty to party, ruled the roost.

In her statement, Snowe reiterated the importance of bipartisanship. “There is not only strength in compromise, courage in conciliation and honor in consensus-building,” she insisted, “but also a political reward for following these tenets.” Or at least, she might have added, there should be. Unfortunately, recent elections and retirements have demonstrated that moderates are more apt to be pilloried and purged than prized and protected. Snowe is simply the latest example in an increasing “no-more-moderates” trend that has only intensified as the ideological gulf between conservative Republicans and liberal Democrats in the Senate has widened. Consider the following recent examples: 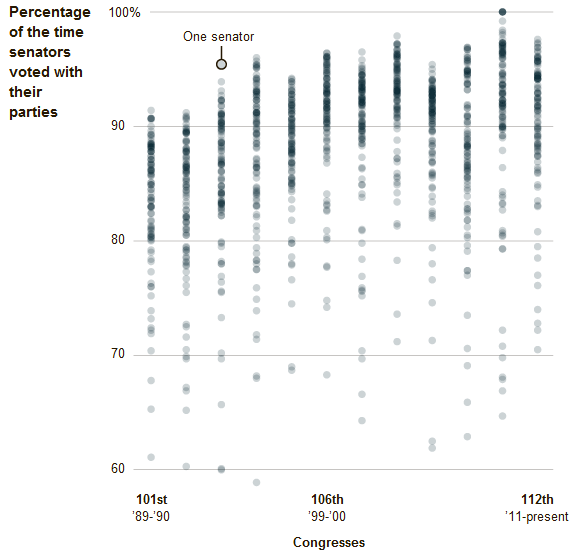 Whether defeated electorally or departing for retirement, the common theme among these aforementioned moderates is that all faced disillusionment within their own party among the base and, therefore, were susceptible to primary challenges—from the right for Republicans and the left for Democrats. When bases feel energized and confident, as did liberals in 2006 and conservatives in 2010, moderates within their respective party coalition are apt to feel intra-party pressures to embrace party orthodoxy, in order to mollify critics within the party. While some moderates such as Montana’s Max Baucus (D) and Maine’s Susan Collins (R) have been fortunate enough to avoid robust primary challenges, such individuals are the exceptions that seemingly prove the rule.

Nothing highlights the power of a dissatisfied base more than an incumbent moderate who loses the primary despite representing a “safe” state regularly won by their party at the presidential level—Republicans in “red states” (Bennett, Murkowski) and Democrats in “blue states” (Lieberman). For these individuals, victory in the general election was relatively assured—provided they could survive a primary from a base recognizing the party’s nominee could become more orthodox without jeopardizing the “safe” status of the seat.

The above list also demonstrates that many moderates today face a dual threat: not only difficulty in winning their party’s nomination as the ideological gulf between them and the base widens, but also difficulty in winning the general election. This is particularly the case for individuals hailing from states within “opposition territory”—moderate Republicans in Democratic “blue states” (Snowe, Chafee, Castle) and moderate Democrats in Republican “red states” (Nelson, Lincoln)—in which their party was the minority in federal races. As such, these individuals were vulnerable to not only primary but also general election challenges. Such is in marked contrast to the past, as Senate moderates historically were able win and hold seats in states the other party dominated at the presidential level, including southern Democrats and northeastern Republicans. However, as polarization has increased, such occurrences have become exceedingly rare.

The electoral stage at which a particular moderate stumbled notwithstanding, it is clear that this group of politicians faces recurrent pressure to conform or perish. While Snowe, Nelson, and Lieberman have exited the electoral stage, others have not. Indeed, many of the most vulnerable incumbent Senators in 2012 are moderates who represent “opposition territory” states: Scott Brown (R) in Massachusetts, Jon Tester (D) in Montana, and Claire McCaskill (D) in Missouri. Veteran Republicans Richard Lugar of Indiana and Orrin Hatch of Utah, both accused of being too moderate for their conservative states, face tough primary challenges from the right of their party. As presidential candidate (and moderate) Jon Huntsman quipped this week when discussing his struggles within the GOP, “This is what [a party does] in China on party matters if you talk off script.” While obviously hyperbolic, Huntsman’s quote nevertheless highlights the way in which a party’s demand for ideological homogeneity and desire to speak with one, official voice can potentially trouble a political system.

Yet moderates, whether liberal Republicans or conservative Democrats, are essential to the health of a functioning democracy, especially given Senate filibuster rules that make one-party rule almost impossible. In a closely divided Senate, moderate members can act as swing votes, forcing the majority leadership to temper its proposals as it patches together a winning coalition. In a Senate in which one party has a sizable majority, albeit shy of the 60-vote supermajority required to break the filibuster, moderates can cross the aisle and end the deadlock. Moderates also can inject civility and restraint into a discourse too often soured by animus and venomous rhetoric.

How Election Rules Affect the Political Fortunes of Moderates

Snowe’s retirement immediately whipped the political punditocracy into frenzy. It would be a mistake, however, should Snowe’s clarion call, which warned of a paralyzed legislature, lamented a moribund public discourse, and spoke of the need for reform, be lost in the resulting tumult. It is essential for Americans not only to grapple with the question of why our polity has mutated into a creature so disquieting, but also to strike at the root of the cause. That root, as Snowe adroitly noted, is the “corrosive trend of winner-take-all politics,” to which she attributes the prevalence of zero-sum tactics and “brinkmanship” in Congress.

Winner-take-all politics, in turn, are linked inexorably to winner-take-all election rules, in which a plurality of the vote wins 100% of representation; voters who select the losing party receive nothing, no matter the margin of defeat. And the rules of a voting system, while perhaps not as enthralling as the battle for power and the clash of values that dominate political coverage, matter—they condition ballot tabulation, influence voter behavior, and affect campaign strategy. “Electoral laws are of special importance for every group and individual in society,” political scientist Douglas Rae noted in 1967, “because they help to decide who writes the other laws.” In other words, winner-take-all rules greatly impact the composition of government—who is in it and who is not, as well as how they get there. If Americans are dissatisfied with the latter—and polls consistently indicate they are—then they must examine the former.

It is astonishing, as one begins to investigate critically our system, how archaic, broken, undemocratic, and destructive our rules are. While many Americans share Snowe’s concerns over political polarization and the seeming inability of partisans to place aside their differences for the public good, they have failed largely to recognize the contribution of winner-take-all rules. After all, under a framework in which the gain of one party is undeniably the loss of the other, it is understandable—though not desirable—that leaders in the political minority might begrudge collaboration with the majority, if such means handing the latter an accomplishment upon which it may run in the next election. It is no surprise, then, that each party defines itself in singular opposition to the other; winner-take-all encourages this behavior.

Many Americans are tired also of negative campaigns, spooky advertisements, and the regularity with which one side brazenly accuses the other of toiling for the ruin of the country, but, again, fail to examine the culpability of winner-take-all rules. After all, in a two-party system permitting just one winner, if negative advertising can devastate or disqualify a competitor, a candidate for elected office need only vilify her opponent to leave voters with just one remaining viable option: the major party that ran the attack (that, or not to vote). Simply put, the apocalyptic rhetoric and black-and-white thinking that pass for political discussion today work under winner-take-all. If you see the world in shades of gray, too bad—recognizing the humanity of the other party and occasionally teaming with it is no way to win votes.

An Alternative Electoral Framework that Could Advantage Moderates

The most natural alterative to winner-take-all is proportional representation (of which there are many forms), a voting system that allocates seats to parties in proportion to their share of the vote. For a while, Illinois employed a "semi-proportional” system, called cumulative voting, for elections to the state legislature; districts featured three seats each. Under this arrangement, each third of the electorate—left, right, and center—typically won a seat. Such meant that most representatives shared constituents with colleagues from other parties. The result was that moderates and independent-minded legislators had the ability and the incentives to forge bipartisan solutions.

While proportionality is feasible for elections to the U.S. House, such a framework, however, is not applicable for senatorial and gubernatorial contests that must feature, by definition, one winner. While no election system is a panacea, there is a lot to like about ranked choice voting (RCV, also called instant runoff voting), an alternative framework—used recently for mayoral elections in Portland, Maine, and San Francisco, California—that would allow voters to rank candidates in order of preference.

RCV consists of a series of rounds, in which last place finishers are eliminated and their voters redistributed to remaining candidates based on second choices. This process continues, round by round, until a candidate receives a majority of continuing ballots. RCV’s requirement of a majority, rather than a plurality, to win office is very important, because a candidate—unless he or she commands over fifty percent of first choices—must build a majority coalition, which means bidding for the supporters of eliminated candidates. Whereas winner-take-all highlights partisan divisions, RCV creates incentives for candidates to emphasize points of concurrence. 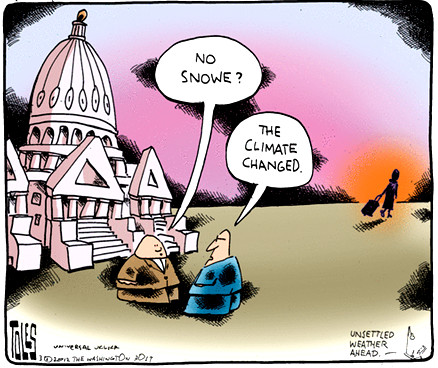 Such a system advantages moderate candidates—provided they have genuine support—in a number of ways. First, under RCV, politics is less of a sprint toward the poles of the ideological spectrum. Second, RCV usually sees a decline in negative attack advertisements, the rules encouraging candidates not to slander an adversary—and risk the ire of his voters—but to build bridges and form partnerships. RCV, in that narrow appeals to a niche of base voters is a less sagacious campaign strategy,  also encourages ideologues to moderate, in order to appeal to voters outside their partisan bases—ironically, much like their heroes, Franklin Roosevelt for liberals and Ronald Reagan for conservatives.

Importantly, the habits of campaigning become the habits of governing, the negative rhetoric and zero-sum thinking of the campaign trail become the negative rhetoric and zero-sum thinking of the Senate floor. If we desire a government founded upon compromise and conciliation—as indeed the Senate was designed—then we must fashion an electoral system that selects for candidates possessing such proclivities. Clearly, winner-take-all is antagonistic toward this goal; it not only compels moderates to squeeze themselves into restrictive ideological boxes but also rewards the very “us-versus-them” mentality moderates by definition resist. I suspect Snowe’s retirement will not, unfortunately, have a lasting impact on the political discourse nor will it galvanize Americans to demand structural change. What is clear, however, is that it should. Snowe had the courage of her convictions. It is time for Americans to have the courage of theirs.