Single-winner Districts: Not what the Founding Fathers intended

In many regards, modern American democracy is dysfunctional -- especially at the national level. Congress is mired in gridlock; passing few laws that align with what the American people want. That gridlock arises from a more fundamental issue: Congress is not an accurate representation of our population. The way in which we elect Congress urgently needs reforming. One very basic reform to the way we currently elect House members is to move from a single-winner system to a multi-winner one. Evidence suggests that this change would better represent minorities, make elections more competitive, and at the same time soften the impacts of increasing partisanship and gerrymandering.

A problem on the path to a more representative Congress is that people are very hesitant about electoral reform, often because they imagine that the system we have now is the system the Founding Fathers created.

This impression is down right wrong.

Our country has a rich history of reforming elections for the better. Virtually every aspect of elections has changed since the founding of our republic. Most of us understand that the right to vote has expanded continuously since the days of the Founding Fathers. However, fewer people are aware of just how much the way Americans vote -- and how we elect Congress -- has undergone fundamental transitions. Our democracy has constantly been evolving, and that evolution needs to continue.

Voting and Elections in the Past

The birth of the United States was, in part, the product of the fight against “virtual representation” in the British parliament; the colonies wanted to be actually represented. Ironically, most Americans have been only virtually represented (or not represented at all) for most of U.S. history. In the early days of the “democracy,” only propertied white men could vote. Over the course of the next two hundred years, propertyless white men gained the vote, and then African American men (for a short while, until Jim Crow laws took hold in the South), women, African American men and women, and, eventually, 18, 19 and 20 year olds. While our democracy has trended towards inclusiveness over the last 250 years, the right to vote has seen some precarious times. Today, debates still center on expansions and contractions in inclusiveness, with American localities considering whether to extend voting rights to 16 and 17 year olds, felons, and non-citizens, along with stricter voter ID laws.

When it comes to the way Americans vote, the voting process has undergone drastic changes. Today elections take place indoors, typically inside public buildings like schools and halls, and are quiet and  reserved affairs. In the time of the Founding Fathers through to the mid 19th century, there were relatively few government buildings (especially in rural counties, where most of the population lived), so voting usually happened outside of the county courthouse, in public houses, or in people’s homes or barns (Bensel, 9). In this communal environment, alcohol played a very important role in elections, with voters expecting to be provided liquor in exchange for voting. Booze was central to elections in the time of the Founding Fathers. James Madison learned this lesson when he lost a Virginia House of Delegates race because he would not offer alcohol to the voters. As the right to vote expanded, and the crowds attending election day increased, during the Jacksonian Era, polling places became ever more rambunctious and dangerous. By the mid-19th century, the noise, crowds, chaos and violence on election day was so great that it was generally accepted that, if a “man of ordinary courage” could get to the voting window then conditions were sufficient to keep polling. (Men of below average courage, apparently, did not deserve the right to vote). Elections remained public carnivals in the open air with free-flowing liquor until the Progressive Era, when they became the calm, orderly procedures they are today. 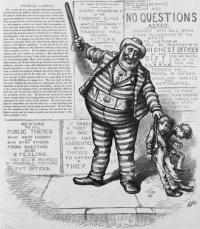 In colonial America, in order to maintain the ideal of political transparency, voting was done by voice or by show of hands. For the Founding Fathers, public, transparent, voting was the norm. As more people became involved in democracy and these forms of voting became difficult to manage, ballot boxes were introduced, but were usually glass in order to maintain transparency. The typical secret ballots of today did not come into play until the Progressive Era (1890-1920), as part of an effort to weaken powerful political bosses like William Tweed. Other present day voting practices emerged in this era too, including the initiative and referendum, primary elections, and voter registration schemes.

The way we elect Congress has also changed. The U.S. Constitution is silent on the exact mechanisms for electing Congress, leaving it up to the states. In the first few post-revolutionary decades, some states chose to elect representatives using the single-winner district system, in which each congressional district elects just one member of Congress, but others chose multi-winner districts, in which a large district elects multiple winners. In the first Congress, in which James Madison, John Adams, Samuel Adams, James Munroe and Benjamin Harrison ran, 46% of the U.S. House was elected using state-wide multi-winner districts. For the first fifty years of the republic, significant proportions of U.S. House members were elected in multi-winner systems.

Additionally, until fifty years ago, a majority of state legislative seats were elected from multi-winner districts, a tradition that continues in ten states. In 1967, Congress passed a law prohibiting at-large multi-member elections to Congress to protect African American voters in the South from being disenfranchised through winner-take-all elections. We take single-member districts for granted, but they have been the norm for only a few decades. They are not inherent, natural, or required by the U.S. Constitution.

It’s Time to Modernize how we Elect Congress

Issues as important as the way we elect Congress should be constantly revisited, analyzed, reassessed and, when that assessment shows serious failings, reformed. Two major national discussions about representation in the U.S. House occurred during 1842 and 1967. At both of those times, serious analysis and reassessment showed that moving towards single-winner districts was beneficial for democracy, and so Congress acted accordingly. In 2015, with higher levels of literacy and political knowledge, the geographical self-packing of voters into uncompetitive districts, and extreme levels of disaffection with Congress, moving away from single-winner districts is necessary in order to fix a broken electoral system and ensure a better democracy.