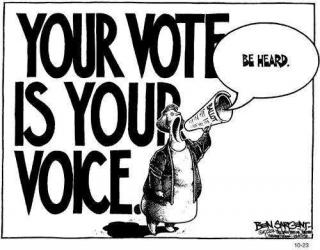 We held a major conference organized around the vision of a constitutional right to vote in November 2003 and many subsequent events over the years, including with this focused case for the amendment earlier this month by our legal analyst Dania Korkor. We advised drafters of the first right to vote amendment language in 2001 as well as the latest version, HJ Resolution 25 sponsored by Wisconsin's Mark Pocan, Minnesota's Keith Ellison and a growing number of other Members. (See our analysis on amendment language.) We've been particularly focused on how the drive for such an amendment can promote immediate local changes to protect, promote and expand suffrage, with our Promote Our Vote campaign resolutions having stirred concrete actions for change in several jurisdictions.

We believe that the nation coming together to establish such an amendment would go a long way to end the "voting wars" that plague us today. When rules are unclear, it is all too easy for those playing the game to try to push the definition of those rules in their favor. By committing to the fundamental nature of the right to vote, our political leaders can instead focus on what they should do in elections: trying to earn votes from eligible voters, rather than trying to game voter eligibility and access.

For this reason, we're thrilled to see rising support for the amendment, whose key backers of the years have grown to include the Advancement Project, Rainbow Push, Color of Change and makers of the movie Electoral Dysfunction (see Mo Rocca cleverly explain the issue). Our general website on the issue, RightToVoteAmendment.com, highlights new voices and energy for the amendment, including a new petition drive backed by Campaign for America's Future, DailyKos, FairVote Action and more.

This weekend, a major new player emerged: the Democratic National Committee. At its winter meeting, the DNC's executive committee unanimously passed a powerfully worded resolution proposed by DNC Vice Chair of Voter Expansion and Protection Donna Brazile that supported the amendment and called for local, state and national action.

This issue should not be one of just the left or just the right. It should not be about whether voting is a responsibility and privilege: of course it is, but above all it is a right. Indeed, the U.S. citizenship test, according to this report (see question #87) often includes this question

Q: What is the most important right granted to U.S. citizens?
A: The right to vote;

The right to vote is indeed the right that grounds all other rights. Let's treat it with the respect it deserves. Let's come together to put an explicit right to vote in the U.S. Constitution and statutory changes in its spirit like the Voting Rights Amendment Act.

As reported by blogger Brad Friedman, the full resolution as adopted is below:

The following Resolution will be considered by the DNC Executive Committee at its meeting in Washington, DC, on February 20, 2015.