Revealing Evidence of Who Votes — and Who Doesn't — in Local Elections

On July 18, 2012, FairVote conducted an exit survey in the Ward 5 vacancy election for city council in Takoma Park, Maryland. City voters in 2005 had backed adoption of instant runoff voting (IRV) by a margin of 83% to 17%, and the City Council unanimously backed a charter change that enacted IRV in 2006. With three candidates seeking the vacancy this past July, the election provided a revealing window into what America's elections might look like if voters had the opportunity to elect candidates using IRV. 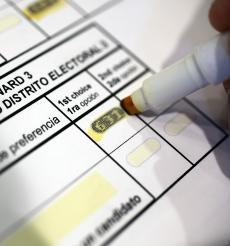 In the election, no candidate won a majority in the first round of counting. Therefore, the second choices of the people who voted for the third-place candidate helped decide the election - with their votes added to the totals of the two finalists in the instant runoff. As detailed in FairVote's analysis after the election, voters handled IRV exceptionally well. Our survey found that not a single participant opposed IRV's use for city elections, and an overwhelming percentage backed its extension to county elections.

After collecting the exit surveys, we became particularly interested in the demographic data we collected about the participants. Our findings are quite revealing about who votes - and who doesn't - in Takoma Park city elections, with the disparities we found almost certainly extending to local elections around the country that do not coincide with more publicized November elections.

One hundred and eighty-nine voters cast ballots in the special election, for a turnout of approximately 15% of registered voters in the ward - low, to be sure, but more than twice the ward's turnout in last November's mayoral election in Takoma Park, and higher than the single digits in several recent mayoral elections in the United States. Of those 189 voters, more than half (92) responded to our survey, with another 31 identified by the survey-takers based on estimated observations of race, sex, and age.

Despite being a racially diverse ward with large African American and Latino communities, more than two-thirds of survey respondents were white, and not even a fifth of respondents were African American. That was true even though the winner was Jarrett Smith, an African American seeking election to a city council that had been all-white for nearly a decade. Smith ran well. He finished first in first-choice rankings and in the instant runoff gained more votes from the defeated candidate after she was eliminated. He ultimately won with 55% of the votes in the instant runoff round-confirming that racial minority candidates can do quite well in IRV elections.

But the survey results tell another important story: that a racial divide exists in Ward 5 voter participation. Despite constituting barely a quarter of Ward 5's residents, white voters constituted nearly two-thirds of survey respondents, while African American and Hispanic voters constituted less than a quarter of respondents. The depressed turnout among racial minorities indicates that the city council may need to further engage its racial minority constituents.

Perhaps the most revealing survey result concerns socioeconomic class. Despite being a district with a large lower-middle-class population, half of the respondents indicated a household income exceeding $100,000 a year. Furthermore, more than half of our respondents had obtained a graduate or professional degree. This reinforces the conventional wisdom that voter participation is positively correlated with income and education, and it further illustrates the need for the city council to engage constituents who do not traditionally participate in the election process.

Further confirming the value of that outreach is data involving non-citizen voters. Takoma Park is one of a few cities in the United States that allows non-citizens to vote in its city elections. Despite this inclusivity, not a single respondent indicated non-citizenship status - and the city clerk reported no non-citizens cast ballots even though many non-citizens live in the ward. This suggests that simply granting the right to vote to non-citizens is not sufficient to allow non-citizens to feel comfortable participating in American democracy, and it suggests that further work is necessary to ensure that non-citizens are engaged in local government.

The age range of the voters also reinforced conventional wisdom; the majority of respondents were older than 50. This occurred despite the position of the election's sole voting location: a university.

Gender also played a surprising role in the election. While more men than women tend to vote in elections nationally, nearly three-fifths of respondents were women. Nevertheless, the only female candidate won the least amount of votes in the election and lost in the first round of counting. This demonstrates that, like race, voters in Ward 5 do not polarize around candidates based on gender.

Finally, although the Takoma Park City Council elections are non-partisan, the survey showed that the ward is ideologically homogenous: more than three-fourths of respondents identified as "liberal" or "very liberal" and as a member of the Democratic Party.