RCV to the Rescue: Non-Majority Winners in Gubernatorial Races

In Tuesday’s midterm elections, 36 states held gubernatorial elections. Of those races for governor, at least 10 resulted in non-majority winners--meaning that no candidate received support from more than 50% of voters. This scenario played out in Alaska, Hawaii, Kansas, Colorado, Florida, Maine, Massachusetts, Oregon, Rhode Island, and Vermont. That means that in more than one in four states that elected a governor this week, a majority of voters will be governed for the next four years by a candidate for whom they did not vote -- and that's not counting the 63% of eligible voters who didn't make it to the polls in the first place.

Rhode Island’s Gina Raimondo (D) won the governorship with a startlingly low 40.2% of the vote, while third-place finisher and Moderate candidate Bob Healy garnered 22% of support. Raimondo's predecessor Lincoln Chafee won the 2010 race for governor with an even lower share of the vote. Maine re-elected incumbent Paul LePage with only 48.3% of the vote, while challengers Mike Michaud (D) and Eliot Cutler (I) split the remainder of the vote with 43.3% and 8.3% respectively. Of Maine's last 11 elections for governor, nine were won with less than 50%.

Florida, one of the most hotly contested gubernatorial races of the year, saw incumbent Rick Scott (R) win narrowly (1.2 percentage points) with 48.2% of the vote. Had that race tightened ever so slightly, the 3.8% of votes garnered by Libertarian candidate Adrian Wyllie would have loomed even larger. In Colorado, incumbent Governor John Hickenlooper (D) was re-elected with 48.9% of the vote and a narrow 2.4 percentage point lead over challenger Bob Beauprez (R) (98% of precincts reporting at the time of this post). In that race, four different minor party candidates garnered more than 4% of votes.

Elsewhere, a Libertarian nominee had a big impact in a key U.S. Senate race in Virginia’. Incumbent Senator Mark Warner (D) survived a challenge from Republican Ed Gillespie by a margin of just 0.8 percentage points. Libertarian nominee Robert Sarvis garnered 2.4% of votes, far more than Warner’s margin of victory--just as he his vote share in the 2013 election for governor far exceeded Democrat Terry McAuliffe’s winning margin. 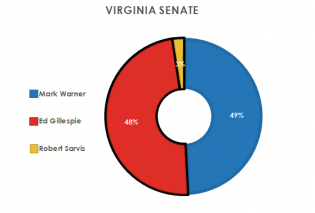 Political parties and special interest PACs certainly have taken note of the potential for “spoilers”: as one example, the Arizona Democratic Party sent campaign fliers to conservative voters featuring a Libertarian candidate in a key congressional race there. When candidates can win with a plurality, strategic and manipulative strategies like this can pay off. While those tactics were not used in the Senate race in Virginia, the portion of conservative voters that voted Libertarian clearly had an impact.

In these key races for our highest offices, minor party and independent candidates garnered enough support from voters to result in a non-majority winner for governor. The winner might well have legitimately been able to win a majority in a two-candidate race, but we will never know. In each case however, ranked choice voting (RCV) would have avoided such a result, and allowed for a consensus winner. RCV allows voters to rank candidates in order of preference and eliminates the “spoiler effect,” while still allowing voters to vote for their favorite candidate.

Mainers, who have now experienced this non-majority winner phenomenon in nine of their past 11 gubernatorial elections, collected more than 30,000 signatures on Election Day in a volunteer-run drive to collect the 60,000 signatures necessary to give Maine voters the chance to decide whether to implement RCV in all state and congressional races. Other states would do well to follow suit, and give their voters an opportunity to vote their conscience on Election Day, without fear of electing leaders who are strongly opposed by a majority of the electorate.