Progress and Opportunity for Ranked Choice Voting in 2015 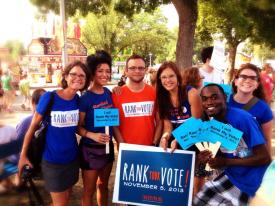 We are only three months into 2015 and it has already been a monumental year for ranked choice voting. Across the country, a growing number of activists and legislators are taking strides towards improving elections by working to adopt and implement RCV.

Ranked choice voting (RCV) is a proven system that is already being used in cities across the US. As a result, those cities enjoy a more inclusive and representative political environment. By providing voters with meaningful choice on the ballot and candidates with incentive to reach out to more voters, RCV improves the relationship between candidates and voters and, in turn, elected officials and constituents.

With RCV elections taking place this year in San Francisco (CA), St. Paul (MN), Portland (ME), and Takoma Park (MD), millions of voters will rank their votes in November. The reform is gaining momentum: as we have highlighted before, in Maine, an initiative led by the Committee for Ranked Choice Voting will appear on the 2016 ballot to adopt RCV in all of Maine’s state and federal elections.

Legislators have taken notice and begun advancing RCV in their cities and states across the country. This year is poised to pave the way for a significant expansion RCV, making 2016 a better year for democracy in many places. Here is an overview of the legislation that has been proposed this year that would advance RCV in several states.

Assemblyman Brian Kavanaugh and State Senator Liz Krueger, long-time champions of ranked choice voting, spearheaded the introduction of Assembly Bill 5744 and Senate Bills 2738 and 2741 respectively, which would create a pilot program using RCV for select jurisdictions when there are 3 or more candidates for a single seat. The state Board of Elections would choose up to ten local governments that would use RCV in the 2019 or 2020 election cycles and would report back to the state legislature on their experience with implementation.

Introduced by Senators Morgan, Kettle, Gee, Lombardi, and O’Neill, Senate Joint Resolution 436 establishes RCV (called “instant runoff voting” in the bill) in statewide elections if no candidate receives a majority. The bill’s counterpart, House Joint Resolution 5462, was introduced by Assembly Members Filippi, Blazejewski, Lancia, Nardolillo, and Chippendale. In the past two gubernatorial elections candidates have been elected without a majority. In 2010 the winning candidate for governor only garnered 36.1% of the vote.

Senate Bill 102, introduced by Senators McKoon, Gooch, Thompson, Millar, and Martin would make Georgia the sixth state to issue military and overseas voters ranked choice ballots so that they can participate in runoff elections without needing to receive, fill out, and send back additional ballots. In the Georgia House of Representatives, HR 399 was introduced, which creates a House Study Committee on alternatives to runoff elections. Presently, Georgia holds primary runoff elections as well as general runoff elections. That means that up to four elections may take place in some years.

Representatives Pearson and Fagan introduced House Bill 115 which would require military and overseas voters to receive ranked choice voting ballots in presidential primaries. Currently Vermont’s primary takes place March 1st. Since Vermont falls after Iowa, New Hampshire, and several other states in the primary season, it is possible that a number of candidates will have dropped out by the time Vermont’s voters go to the polls. For military and overseas voters, this means news of candidates dropping out may not reach them, or have even happened yet, when they cast their absentee ballot. By allowing military and overseas voters to use ranked ballots, their vote would go to the candidate ranked highest on their ballot who is still in the race ensuring they are able to fully participate in the Presidential primary election. Ballot Access News has reported that a similar bill is being drafted in Massachusetts. FairVote has advocated for this simple change to ensure that military and overseas voters are able to fully participate in these elections. For more on the use of ranked ballots in presidential primaries see our one-page policy guide.

Councilmember David Grosso re-introduced the Instant Runoff Voting Amendment Act of 2015. He introduced this same bill last year. The Washington Post has editorialized on ranked choice voting in the district 6 times in the past few months and recently the League of Women Voters of DC has publicly endorsed ranked choice voting after a year long study.

House Bill 1280 has been introduced by Representatives Sanders, Halverson, and Wehardt. This bill would give non-charter cities the ability to use ranked choice voting for city elections. Following the successes in Minneapolis and St. Paul and the petition campaign that is kicking off in Duluth, many cities around the state are interested in exploring the option of RCV for elections.

House Bill 997, introduced by Delegates Hixon, Ebersole, Fennell, Long, Platt, and Turner, along with Senate Bill 680, introduced by Senator Raskin and Senator Pinsky, would establish a State-wide Blue Ribbon Commission on Voting, Openness, Transparency, and Equality in Elections. This commission will study a variety of ways to increase turnout and engagement in Maryland elections. Among these proposed solutions is ranked choice voting both for single seats as well as for multi-seat districts. FairVote submitted written testimony to the Maryland Senate in support of establishing the Blue Ribbon Commission.

These legislative developments bode well for progress in 2015 and beyond. Stay tuned to the FairVote blog as we track these exciting developments, and work to create new opportunities to advance ranked choice voting in cities and states across the nation.