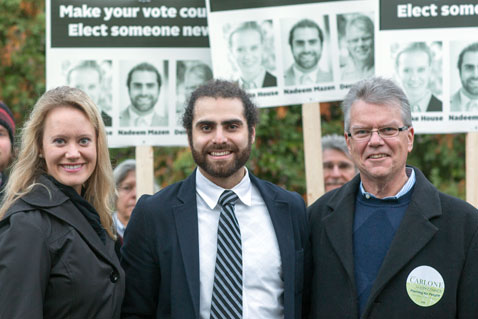 As we discussed prior to last month's election, Cambridge, Massachusetts is the only municipality in the United States to elect its city council using the at-large form of ranked choice voting. The combination of a low threshold for election with the use of ranked choice voting allows voters in Cambridge to elect a City Council that is diverse, representative, and responsive to the evolving preferences of the city's electorate. That's especially clear when choice voting is compared to the most common system for municipal elections: winner-take-all block voting.

The effect that the city's unique electoral structure had on this year's Cambridge elections can be illustrated by using the ballot data from this year's contest to simulate the election using block voting. Under a block voting system, Cambridge voters would have elected just one new face to the Council instead of four, with the city's first Latino and first Arab-American city councilors among the defeated.

Block voting, also called plurality-at-large voting, is the most common method for the election of city councils in the United States.  Under block voting, representatives are elected from a multi-member district in an election in which each voter can vote for a number of candidates equal to the number of seats to be filled. This allows the largest faction of voters to elect a slate of candidates they support to the exclusion of other groups, often causing disproportionate results. In contrast to the proportional system used in Cambridge, block voting is a winner-take all system, in which 51% of the electorate has the power to control 100% of the representation.

In Cambridge, voters are given only one vote for city council, rather than nine. This vote can be transferred between the candidates in the order chosen by voters to minimize the chance that their vote will be wasted on a candidate who is elected easily, or who does not have enough support to win office.  Groups of like-minded voters can elect candidates in proportion to their share of the population, without fear of electoral domination by the majority.

This year's election saw two incumbents unseated in addition to two that declined to run, while the city elected its first Latino councilor, Dennis Benzan, and the first Arab-American, Nadeem Mazen.  Mazen, a former Occupy Boston spokesperson, was elected along with fellow challenger Dennis Carlone as part of a slate of candidates who promised to bring new energy to city government in Cambridge.

By treating each ranking, one through nine, as a vote made by Cambridge voters in the election for the city's nine council seats, we can approximate what the election results would have been using a block voting system (the distribution of top nine rankings has been tabulated here by Cambridge political observer Robert Winters).  Unsurprisingly, this counterfactual experiment demonstrates how block voting disadvantages candidates representing ethnic and political minority groups in favor of candidates who have greater name recognition and support among a plurality of voters.

Under a simulated block voting system, councilors-elect Dennis Benzan, Dennis Carlone, and Nadeem Mazen would each have fallen short of election, to the benefit of incumbent councilors Kenneth Reeves and Minka vanBeuzekom, and former councilor and vice-mayor Sam Seidel.

The outsized power of the majority in block voting systems would have denied representation to the supporters of Benzan, Carlone, and Mazen, many of whom were members of the city's growing Latino population or voters hoping for new ideas and new faces in Cambridge government.  Instead, the proportional system in Cambridge ensures that the voices of these constituencies will be heard in city government, and that the council will remain responsive to changes in the city's electorate.