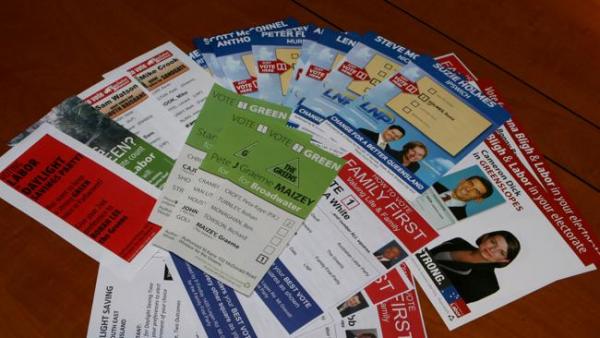 Key resources on elections in Australia:

This advantage of RCV is critical given the degree of choice Australian voters are presented with at the polls. With 150 house seats up for election, every single race has a least four candidates, with a median of at least seven (see this chart of candidates by district). The Green Party, for example, runs in every district and is likely to earn more than 10% of the vote. The fact that no one is talking about "spoilers" and illegitimate outcomes is due to ranked choice voting.

Recent polling suggests the Australian Labor Party government of Prime Minister Kevin Rudd is unlikely to retain power after the elections. The country's 2010 election was unusual, as it resulted in a hung parliament for just the second time in history. The Labor Party was able to stay in power by forming a minority government with support from independent and Green Party MPs. This time around, support from these crossbenchers may not be enough to overcome a strong electoral performance from opposition leader Tony Abbot and "The Coalition," the alliance between the conservative Liberal Party and smaller conservative parties that has, in one form or another, been the Australian Labor Party's primary electoral opposition since 1922.

Ranked choice voting was implemented in Australia in order to prevent the vote splitting inherent in first-past-the-post elections. The need for such as system became apparent to conservatives in the late 1910s after the emergence of the Country Party (now the National Party of Australia) and the Nationalist Party split the conservative vote. The existence of two major conservative parties put conservatives at an electoral disadvantage to those on the left, who were relatively more united behind the Labor Party.

Prior to the 1980s, ranked choice voting primarily benefited the Coalition conservative parties. Since then an increasing number of minor parties outside of the conservative coalition, along with the recent rise of the Australian Greens, have led to a large increase in the number of seats won by the Labor Party in "instant runoffs" after no candidate won a first round majority.

Australia also has the unusual trait of requiring voters to rank each candidate presented on the ballot in order for their vote to be valid. Known as "full preference voting," this system stands in contrast to the most common ranked choice voting systems, wherein voters are asked to rank as many candidates as they would like. Requiring voters to rank every candidate provides an absolute assurance that particularly disliked candidates will not be elected, though this does place a greater burden on voters.

Ranking each candidate has been a particular challenge in senate races, given the increasing number of candidates and parties in Australian politics. In a six-seat senate district, most parties will run several candidates. The relatively low (14.3%) threshold for election of a senate candidate has attracted not only growing minor parties like the Greens, but also a wide range of niche parties like the Australian Sex Party and the Wikileaks Party, the electoral vehicle of Wikileaks founder and Australian Senate aspirant Julian Assange. Such groups have sought to expand Australians' electoral options, undeterred by the major parties' attempts to limit ballot access, and the fact that the Coalition, Labor Party, and Greens together took 74 of the 76 senate seats in 2010.

To simplify the voting process in senate races with large numbers of candidates, Australian voters have had the option to vote "above the line" since 1984, meaning that they can cast a single vote for a party to adopt the party's ranking of each candidate in a race, rather than ranking every candidate themselves. The majority of Australian voters use this option. One interesting consequence of this rule is that it forces the parties to indicate not only which other parties they prefer, but also to rank candidates within those parties.

For House elections, every voter must indicate their own preferences, but may choose to follow recommendations by parties that distribute "how-to-vote cards" outside polling places with suggested rankings of each candidate in the race. These how-to cards and "above the line" party preferences can be source of additional political intrigue at election time.