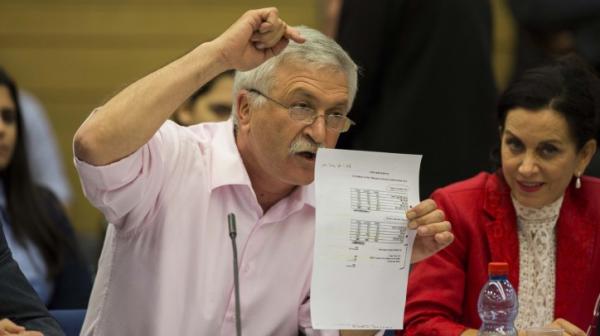 "We won't really have a democracy."

Those were the words of Yisrael Hasson, a member of the Israeli Knesset from the centrist party Kadima, on the implications of an electoral change that is being considered in Israel's parliament. Was he referring to gerrymandering, or campaign finance laws, or voter disenfranchisement? No. Hasson was talking about a 1.25% change to the threshold of election.

Why is Hasson and so many other members of the Knesset so virulently opposed to such a seemingly minor alteration in the election law?

The Push for Threshold Reform

Momentum for electoral reform gained traction following the Israeli general elections in January 2013. As I wrote at the time of that election, Israel's nationwide closed list proportional system is very effective at reflecting the views of voters in the Knesset, but leads to party fragmentation and, occasionally, unstable governments.

Reform groups in Israel like the Israel Democracy Institute and Israel's Hope have identified the electoral system's low threshold of election - just 2% of the national vote is needed for a party to win a seat - as one of the culprits for these problems. The prescription is straightforward: raise the threshold, so that only parties popular enough to garner a more substantial number of votes make it to parliament, thereby reducing the number of parties that could extract concessions from larger coalition partners.

Indeed, on July 31, a bill to double the threshold to 4% passed first reading in the Knesset. On December 26th, Prime Minister Benjamin Netanyahu and Foreign Minister Avigdor Lieberman agreed to the change, though their deal would raise the threshold to only 3.25%. The proposal will see a final vote later this month.

But while a threshold change of just 1.25% might seem innocuous, it is not without real consequences. Because Israel's party system is so fragmented, even a low threshold will mean a significant number of excluded parties and votes wasted. In the 2013 election, 32 parties appeared on the ballot, 12 of which exceeded the 2% threshold and won Knesset seats. Three of those 12 parties would have failed to win a seat under the 3.25% threshold.

Kadima, which won the most Knesset seats in the 2006 and 2009 elections before dropping to two seats after a disastrous 2013 election, is one of those three. Yisrael Hasson's concern over the threshold change is understandable, considering that he would not currently be in the Knesset had the law been in place in 2013.

The other two such parties, Balad and Hadash, are perhaps more problematic for proponents of raising the threshold. They are both Arab Israeli parties (Hadash is an Arab-Jewish partnership), and are therefore squarely in the center of the most contentious issue in Israeli politics: the Palestinian question. Together, Arab Israeli parties currently make up 11 seats in the Knesset, serving to counter the more hawkish parties of Israel's right wing. In the 2013 election, the right-wing and center-left-wing blocs each won 60 seats, forcing Prime Minister Netanyahu to enter into a coalition with the moderate Yesh Atid party instead of his usual ultra-Orthodox partners. The 11 seats won by Arab Israeli parties were a necessary part of that delicate balance.

With such clear implications for the balance of power in the Knesset, it is no wonder that the threshold change is facing controversy. Making matters worse is the adverse effect that a higher threshold could have on voters. In the 2013 election, 7% of Israeli voters wasted their votes on a party that did not exceed the 2% threshold. Had the proposed threshold change been in effect, that number would have jumped to 15% of votes wasted.

Lieberman's participation in the agreement adds one final note of awkwardness to the reform proceedings. The Foreign Minister is well-known for proposing a "population transfer" peace plan, in which areas populated by Arab Israelis would be removed from Israel and given to the Palestinian Authority. This has led to a perception of Lieberman as being anti-Arab Israeli, and his support for the threshold change has been described by some on Israel's political left as just another attempt to exclude Arab Israelis from the state of Israel.

The three Arab Israeli parties won 2.56%, 2.99%, and 3.65% of the vote in the 2013 election, making it plausible that none of the three could wind up with a single seat in a future election using a 3.25% threshold. The parties could avoid that fate by combining into a single pan-Arab Israeli party, but doing so would force Arab Israelis to organize solely on the basis of their ethnicity instead of on their policy and philosophical preferences.

Raising Israel's threshold could be an important first step toward increasing the stability of the country's proportional representation system. But in the current political environment, the unintended negative side effects of the change could end up outweighing the benefits.

There is one solution to this dilemma that has rarely been discussed: introducing a ranked choice component to the party list system. Allowing voters to rank parties in order of preference would allow for a higher threshold of election without wasting the votes of small party voters or depriving Arab Israelis of representation.

The ranked choice system would be simple. Here's how it would work, in three steps:

1. First choice rankings for each party would be counted. Any party receiving more first choices than the threshold of election would be guaranteed seats.

2. Parties receiving fewer first choice rankings than the threshold of election would be eliminated. Voters who preferred the eliminated parties would have their votes transferred to their highest ranked party that exceeded the threshold.

3. Seats would be allocated proportionally to the seat-winning parties after all votes are either transferred or exhausted.

Adopting ranked choice voting for party lists in Israel would not cause drastic change in the Israeli political system. Election fights between the major parties would be largely unchanged, other than the fact that those parties would have an incentive to appeal to minor party voters. The balance of power in the Knesset would not likely be significantly altered.

Where ranked choice voting would have a major impact is on smaller parties and their voters. The effect would be threefold:

1) No votes would be wasted on parties that do not earn seats in the Knesset, as long as voters rank at least one party that passes the threshold; 2) Vote splitting issues would be eliminated, ensuring that blocks of voters exceeding the threshold (such as Arab Israelis) would earn representation; 3) The threshold of election could be raised without fear of exacerbating vote wasting or vote splitting.

Ranked choice party list voting is a reform that would be useful not just in Israel, but in any nation that uses party list proportional representation and has a high threshold of election. Turkey, to name one, has seen enormously distorted election results in recent years as a result of its 10% threshold. Ranked choice voting would not affect the inflated seat totals that major parties like Turkey's AKP receive as a result of high thresholds, but it would guarantee that the parties controlling the legislature would have the support of a majority of voters.

The addition of a ranked choice voting component to the bill raising the Israel's election threshold would seem to be the rare electoral reform that satisfies all parties. The major political parties and good governance groups in Israel would get a smaller number of parties and greater stability. Avigdor Lieberman could achieve this political victory without further widening the divide between Jews and Arab Israelis. Minor parties would have a more difficult time winning seats, but in exchange would be assured that voters would be more likely to vote for them because their votes could not be wasted. Parties that do not win seats would still know that their votes are transferred to an ideologically similar party.

Perhaps even Yisrael Hasson could be persuaded that democracy in Israel will carry on with an election threshold of 3.25%.