Under the current system, presidential candidates must target all their attention towards swing states, meaning those politically divided states that could tip the majority of the Electoral College towards one candidate. Candidates have no incentive to focus any resources on states that will predictably vote Democratic or Republican in nationally competitive elections. Even with the similarities between states like North and South Carolina, a small percentage of difference can be the gap that labels a state either an election favorite or an election orphan.

As we track the movement of the president, his trend to focus on swing states stands out. According to The New York Times, 34 states will decidedly vote Republican or Democrat this election. Most analysts reduce the number of states that can truly tip a close election to seven or eight. 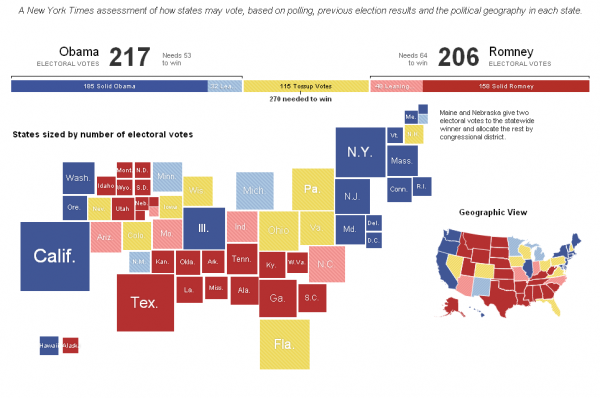 Both major party candidates will funnel resources away from predictable orphan states like South Carolina into battleground states like North Carolina. The Boston Globe  reports the Democratic National Committee (DNC) has given $25 million to state parties for voter outreach in about a dozen swing states, and that a Super PAC tied to Mitt Romney has bought $4 million in ad time to be spent in those same states.

The Globe reports the DNC has already invested $976,000 in North Carolina, exceeded only by donations to parties in the usual trio of big swing states: Ohio, Florida and Pennsylvania.

That kind of focus is also demonstrated by our Presidential Tracker, which reports on every event and state visit by President Obama since assuming the presidency. Just as in 2004, when George Bush ran for re-election without a primary opponent, the White House will again keep a close eye on swing states when prioritizing where to travel.

In a practical effort to lead the United States, candidates are left with no other option than to bypass millions of American voices in order to hear the few that will actually influence their victory. Utah, for example, has not come within 6% of voting Democrat since 1912 – and is among the least likely swing states for at least another generation. .

That means presidential candidates have consistently lacked incentive to seek the voice of Utah citizens, Republican, Democratic or independent. Unsurprisingly, Utah is among the five states with the biggest drop in youth turnout over since the voting age was lowered 40 years ago.

This year, all 2.8 million Utah residents will again stand by watching with the majority of the United States as candidates from both parties pour millions of dollars into a handful of states as they bounce back and forth speaking and advertising to the few voters with any decision power.

With the polarization of parties and shrinking number of battleground states, the electoral system is muting an increasing number of American voices. The current system stifles the majority of Americans by locking them into geographic regions where they are barred from casting a vote that carries any weight. While 72% of Americans favor a national popular vote in presidential elections, the Electoral College continues to speak on their behalf.

More than 98% of campaign events and campaign spending took place in only 15 states in the final months of the 2008 election. These states make up 37% of the nation’s eligible voter population, and their voter turnout was only 67%. In other words, 25% of the country’s population received 98% of attention from candidates in 2008. From within the 25% of Americans that voted in these swing states, the real campaign targets were a small pool of swing voters who can decide a state like North Carolina, but not one like South Carolina.

A national popular vote, in contrast, would shift the focus of presidential candidates from fighting ruthlessly over the margins of an already marginalized country and on to listening to the rest of U.S. voters. It won’t happen in this election, but if the national popular vote determines the president in 2016, maybe 98% of funds and campaigning will be used across 98% of the country.

Follow our Presidential Tracker as we update you on President Obama’s location on the campaign trail. We will also be keeping you posted on former Governor Romney’s campaign whereabouts as things heat up before elections. Keep your eyes open for the Romney Tracker.

*38% of events held by Obama in 2012 (30 of 80) have been held in swing states. We predict this number will surpass the current 38% as the campaign season continues forward.

* President Obama has held five public events in Ohio, a swing state, since January and hasn’t yet gone to Ohio’s neighboring states of Indiana, Kentucky or West Virginia since May of 2011.

* Obama has held 23 of 45 campaign fundraising events in California, New York and Florida so far in 2012.