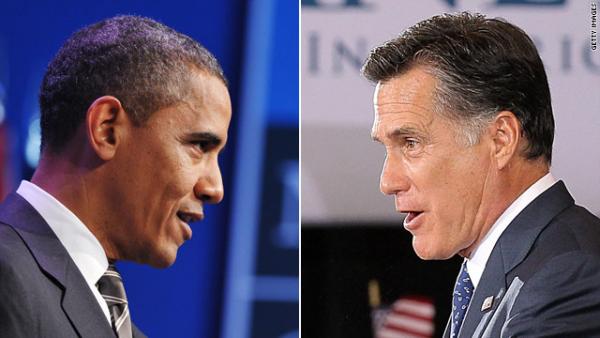 Barack Obama: After stints in swing state Florida and Georgia on Tuesday, the President spent Wednesday campaigning at a fundraising event in Washington, DC.  On Friday he will visit an area of swing state Colorado that was damaged by wildfires.

Should the Same Three States - Florida, Ohio and Pennsylvania - Be Able to Determine the Outcome of Every Presidential Election?

"In every presidential election since 1960, the winning candidate for president has carried at least two of the three [among Florida, Ohio and Pennsylvania]. These three states combined have 67 of the 270 electoral votes needed to win the election." Cafferty argues that isn't fair.

CBS reports that Obama-like Romney-will hit the road for a bus tour of swing states Ohio and Pennsylvania on July 5 and 6. These are tactical locations, as CBS reports, given that "Ohio and Pennsylvania, with 38 electoral votes between them, are crucial to the president's re-election bid."

Like Obama and Romney, Biden is visiting key swing states on a bus tour. He spent Tuesday in Iowa, the Washington Post reported Tuesday.

The Washington Examiner reports, "As of now, Obama has a clearer path to the required 270 electoral votes than Romney does. This was apparent in a Wall Street Journal/NBC poll released Tuesday, which showed Romney within a statistically insignificant three points of Obama nationally, but eight points behind him among voters in a dozen swing states."

According to the Post's Rachel Weiner, presidential ads in swing states are making a huge difference for Obama's campaign.

After Obama's announcement to stop deporting young undocumented immigrants, as well as the Supreme Court's decision to strike down most of Arizona's law against illegal immigrants, Romney's approval rating among Latinos is forty points behind that of Obama. The LA Times predicts those ratings "will matter a great deal if the election turns out to be as close as it is expected to be."

Obama Leads Big with Hispanics, but They're Not Fired Up and Ready to Go Yet

Although Obama has an advantage among Latino voters who make up a large portion of the electorate in swing states Colorado, Nevada and New Mexico-and are a growing population in Virginia-this article points out that if Latinos don't vote, the fact that they favor Obama is irrelevant.

First Thoughts: Steady as She Goes

MSNBC's analysis shows that the way the presidential candidates handle natural disasters in swing states Colorado and Florida could be instrumental to their respective ratings and the election outcome.

Swing State Voters Split on Whether Romney, Obama Better for the Economy

Although voters in Florida, Ohio and Pennsylvania approve of Obama's immigration policies, they are uncertain of his ability to improve the economy, according to CBS. As immigration is "far less pressing for voters" Romney might be able to win those three states if he can convince voters he's more adept at handling economic issues.

Defense Sequestration: It's About the Economy and National Security

Compared with May polls, Obama gained nine points in Ohio and four points in Florida. New York Times reporter Allison Kopicki points out that Obama's immigration policy might have put him ahead in those two swing states.

No, We Don't Have Evidence of An Obama Advantage in the Electoral College

Although a number of news outlets have reported that Obama leads in all nine key swing states and has an advantage with Electoral College votes, the New Republic discounts those polls for lacking a significant sample size. Apparently, the race isn't so clear-cut in Obama's favor.

Many DC Democrats are traveling where their contribution to Obama's campaign counts more, especially in swing states such as Pennsylvania.