With the Electoral College, presidential candidates must target all their attention, time and resources towards swing states, turning the remaining states into spectators.  The following stories highlight these trends. 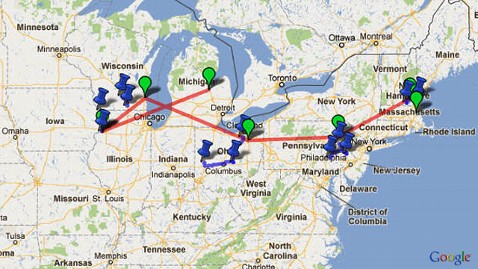 Obama: After today, President Obama will have spent 5 days of the last week campaigning in Massachusetts, New Hampshire, Florida and Georgia. Today is his second visit to Florida and will take him from two to four Florida events in the last week with two evening fundraisers. He will spend this afternoon fundraising in Georgia. He held three events while in Massachusetts and one event in New Hampshire.

Romney: Romney held three campaign events and two fundraisers in Michigan last week to finish off his "Every Town Counts" bus tour. He spent yesterday at a campaign event in Arizona and will be in Virginia today speaking at Carter Machinery Company.

Nine is Not Enough, or Participatory Democracy

Joe Scarborough reports that Obama and Romney neck-and-neck in the polls, below-average unemployment rates in key "battleground states" (like Florida and Virginia) are a crucial selling point for Obama's reelection campaign.

Now that Missouri is no longer a swing state, candidates are spending less time and money there, according to CBS . This fact highlights that not all states-and not all votes-have equal weight in the presidential election.

Latino Voter Enthusiasm, a Key Indicator for Obama, Trending Up

As the nation's largest minority group, Latinos play a critical role in the POTUS election result. LA Times reporter Paul West writes, "if minority groups turn out at levels at least as high as four years ago, they could play a decisive role in this year's presidential election. If they don't, Obama could well lose."

How Immigration Plays in Battleground States

The Wall Street Journal reports that Obama's recent announcement to stop deporting young illegal immigrants is a clever reelection strategy considering that a large number of foreign-born Hispanics live in battleground states such as Colorado and Florida.

Romney is tailoring his campaign rhetoric in order to win crucial swing state votes, shedding the social conservatism that had defined his campaign in the primaries, according to The Guardian.

According to this CNN Political Ticker post, Obama is spending money where it counts: he'll be running a new commercial promoting equal gender compensation-but it will only run in swing states Colorado, Florida, Iowa, North Carolina, Nevada, Ohio and Virginia.

Remapping the Road to Victory

This WSJ story illustrates that, while there are nine battleground states this election, four seem to be particularly important: Wisconsin, Michigan, Minnesota and Pennsylvania.

As swing states would be hit hard if Obama's healthcare reform law were struck down, Obama could lose those key states, according to The Hill.

This CNN story shows that Obama is targeting ad money where it counts, in swing states Iowa, Virginia and Ohio. Moreover, he's tailoring each of the three ads to "cater to the state in which it's airing."