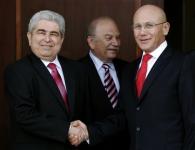 CURRENT LEADERS: Currently, the government of the Republic of Cyprus (South) is headed by President Demetris Christofias of Kyrenia, Cyprus. He is the leader of the communist AKEL party and was sworn in on 28 February of 2008. He is the sixth serving president. In the North, the government of “TRNC” is headed by "President" Mehmet Ali Talat, also of Kyrenia, Cyprus. He is the leader of the Republican Turkish Party and was sworn in 17 April 2005. He is the second serving president. It is important to note the close relationship between the two leaders of the North and South regions. In the past, there has been an ongoing debate concerning whether to pursue “Enosis,” reunification in Greek, or “Taksim,” separation in Turkish. Hopes were high in recent years that an agreement would be reached that would reunite the island under these two leaders, being as they were coming from the same city, had good relations, and held the same hopes for “Enosis,” but so far even though they have held over seventy negotiation meetings, a successful resolution has yet to be reached. Future negotiations depend heavily on the outcome of the election.

He is the leader of the left wing Republican Turkish Party (RTP) and was then elected President on 24 April 2005, preceded by Rauf DenktaÅŸ. During his political career he also served as the Minister of Education and Culture under the first and second coalition governments and as Minister of State and Deputy Prime Minister under the third DP-RTP coalition government. He has made significant strides toward reconciliation with the Republic of Cyprus throughout his presidency including promoting a “Yes” vote on behalf of the Turkish Cypriots for the Annan Plan during its’ 2004 referendum. This plan called for a “bi-zonal, bi-communal federation” or a single international entity comprised of two communities. This was a potentially pivotal moment in history and the closest the island has ever come to a reunification resolution; however, President Papadopoulous’s Republic rejected it.

He was the leader of the National Unity Party (UBP) from 1983 until 2005 and served as Prime Minister of “TRNC” from 1985 to 1994, from 1996 to 2004, and was re-elected in 2009. During his political career he also entered the Assembly of the Republic of Northern Cyprus and served as Minister of Education, Culture, Youth, and Sports from 1976 to 1977, served as a member of the de facto TRNC Constituent Assembly in 1983, and ran for President in 2004 but was defeated by Talat. He believes in a “two-state solution."

He in an independent candidate who served as an officer in the army until January 2009. Tumkan says that “his ideals are for a sovereign independent Turkish Republic of Northern Cyprus and for the statehood of the Turkish Cypriots who are complete equals with the Greek Cypriots on the island.”

He is an independent candidate who founded his own political party, the United Sovereign Party. He believes that the current negotiation process is the last of its kind. He believes in a loose confederate which conforms to EU regulations, such as a solution that designates three areas: a Turkish federal wing area, a Greek federal wing area of the founding states, and a third area belonging to the central federal government.

He is an independent candidate who served at the Agricultural Ministry as a Consultant. He has declared that a comprehensive settlement in the least amount of time is a top priority. He also believes that the bi-zonal aspect of the solution and High Level Agreements are the most crucial.

He is an independent candidate and an academic. He also wrote various books on the Constitution following the declaration of “Turkish Republic of Northern Cyprus”. He has stated that he does not believe Greek Cypriots are ready for a comprehensive settlement and that his main focus if elected would be on equal rights for Turkish Cypriots.

He is an independent candidate who entered politics in 1983 and was elected as a Foreign Affairs and Defense Minister in the Parliament. He also served as the first and second secretaries of political affairs and undersecretary to the Prime Minister. ErtuÄŸruloÄŸu served as the Party Chairman for the National Unity Party from 2006 until 2008. He believes that no solution can be reached until the existence of “TRNC” is recognized, Turkish Cypriots obtain equality, and the Guarantees of Turkey are not accepted.

Historically, independent parties do not tend to take much of the vote; however, in this election candidate ErtuÄŸruloÄŸu is expected to make some waves because of his previous affiliation and formerly held chairman position with DerviÅŸ EroÄŸlu’s National Unity Party. Plainly speaking, the three most central candidates to watch in this election are Incumbent "President" Mehmet Ali Talat, Incumbent "Prime Minister" DerviÅŸ EroÄŸlu, and Tahsin ErtuÄŸruloÄŸu.

Stay tuned for our next post that will discuss poll updates and projected results of this pivotal election!