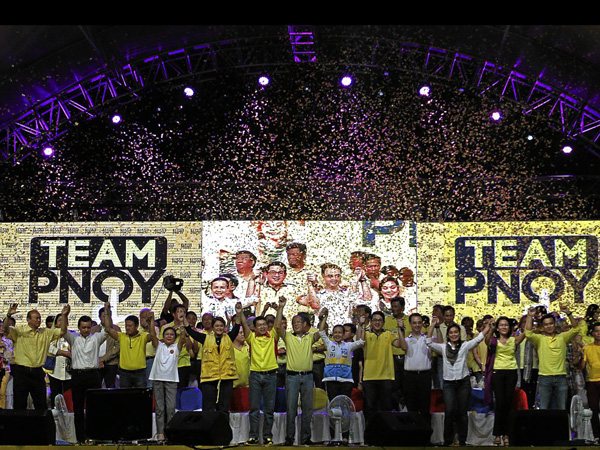 The results from Monday's midterm elections in the Philippines are in, with President Benigno "Noynoy" Aquino III's Liberal Party and his ruling coalition "Team PNoy" (named after their leader) coming out on top. Although President Aquino himself was not up for reelection (his 6-year term expires in 2016, after which he may not run again), success in the elections was considered vital for his agenda. In addition to maintaining its control of the House of Representatives, Team PNoy is poised to pick up nine of the 12 contested Senate seats this cycle, making Aquino the first president since the restoration of democracy in 1986 to have majorities in both houses of Congress.

The elections in the Philippines come on the heels of a controversial decision by the country's Supreme Court on its party list system, used to elect 20% of the seats in the House of Representatives. Under the terms of the Philippines' 1987 Constitution, 80% of the seats in the House are comprised of single-member geographic districts, with the rest of the seats reserved for at-large party list seats. The party list component of the House does not follow the traditional model of simply giving each party seats in proportion to their nationwide vote share. Instead, the framers of the 1987 Constitution mandated that the party list must represent "labour, peasant, urban poor, indigenous cultural communities, women, youth, and such other sectors as may be provided by law, except the religious sector." The goal of this system, as articulated in a 1995 law, was to "enable Filipino citizens belonging to the marginalized and underrepresented sectors, organizations and parties... to become members of the House of Representatives."

The results of the party list have been mixed. Because parties running for list seats needed to be independent of the national parties, the system provides the opportunity for marginalized groups to express themselves in government. In reality, however, critics have noted that many of the representatives coming from the PR tier are relatives of the prosperous and well-connected political elite that dominates Philippine society. Nevertheless, the party list has created a small degree of proportional representation and allowed groups representing senior citizens, women, farmers, and others to participate in governance.

That brings us back to the most recent Supreme Court ruling on April 5th, 2013, which altered the nature of the PR tier just over a month before the election. The Court ruled that national and regional parties could now run in the party list along with marginalized and underrepresented groups. The Court remanded to the Commission on Elections (Comelec) the petitions of 39 parties that Comelec had previously denied entrance to the party list. Although the major parties, such as Aquino's Liberal Party, may not run directly in the PR tier, the ruling allows for larger parties, potentially affiliated with the major parties, to run in the elections.

Reaction to the ruling has been divided. Unsurprisingly, previously-banned parties that are now allowed to participate, such as the Ako Bicol party, support the ruling, arguing that it provides much-needed reforms and includes safeguards to protect the system from abuse by the rich and powerful. Constitutional scholar and retired justice Vicente Mendoza lauded the decision as well, noting that the intent of the Constitution all along was to open up the party list to non-sectoral groups after a certain amount of time. Criticism of the ruling, however, has been strong as well, with party list groups as well as watchdogs warning that the decision "opened the floodgates for powerful, filthy rich and long-established personalities and groups to infiltrate and dominate the world of real marginalized and underrepresented sectors," as one recent op-ed in the Philippine Daily Inquirer put it.

But a look at the party list winners of Monday's elections shows that the claims of both those supporting and opposing the ruling were likely overstated. The latest vote totals released by Comelec show the Buhay party list in the lead, with a little over a million votes (4.7% of total votes cast). Buhay is a pro-life party founded by the multimillionaire leader of the charismatic Catholic religious group El Shaddai, Mike Velarde, and had been allowed to run and win seats in the 2010 election. Fourth-place finisher Akbayan, meanwhile, has members serving in the executive branch and was explicitly endorsed by President Aquino; it too has been running in the PR tier for years. The Court's ruling did little to affect the underlying fact of the concentration of political power in the elite families of the Philippines, a problem that is by no means unique to the party list. Philippine society on the whole is dominated by celebrities and a handful of political dynasties. The presence of the wealthy elite in the PR tier is less a cause than it is a symptom of deeper problems in the politics of the Philippines.

Consequently, the success or failure of the Philippines' current party list system cannot be used to predict the results of applying proportional representation to other countries currently using winner-take-all, simply because the system itself and the politics surrounding it are so unusual.

Furthermore, there is not an obvious electoral solution to prescribe for the Philippines to address all the unique challenges its political system faces. However, many of the problems that continue to plague elections in the Philippines, such as uncompetitive elections and distorted outcomes, are common in winner-take-all systems. Shifting away from the current party list system, which comprises a small tier that gives a few representatives to minor interests, to a more broadly proportional system that accurately represents all parties, viewpoints, and interests in the nation would likely benefit the Philippines in the long term.