People of Color in American Elections, 2014: Advances and Setbacks

This post-midterm election coverage has been dominated by rhetoric of change--from a Republican takeover of the House and Senate to history-making “firsts” like Utah’s Mia Love’s election as the first female African American Republican representative and Tim Scott's solidifying his seat as the first African American to be elected to the Senate in the South since Reconstruction. Next year, Congress will have 49 African Americans, with the increase of five since January 2013 the biggest increase in two decades.

After first taking office in 2013, Tim Scott and Cory Booker have brought diversity to the Senate as its only two African-American members (Scott was originally appointed by South Carolina Gov. Nikki Haley to fill an open seat, and Booker was elected in a special election). But taking a broader view of all 535 seats in the new 114th Congress, only 46 members are African-American, 37 are Hispanic and Latino, 11 are Asian American, and two are Native American. The demographic makeup of the Senate echoes the problems of the current American democratic system: 94 of 100 Senators are white despite whites' making up just 64% of the nation's population. 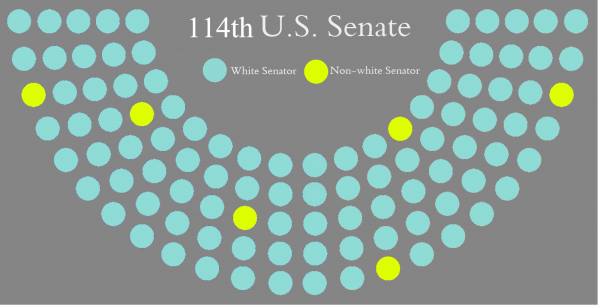 And looking below the federal level, representative government across the board fails to reflect the country’s diversity, as demonstrated by the fact that we will have no African American governors. While men and women of color have made advances this round of elections, we cannot get wrapped up in the party streamers and forget the barriers that candidates in ethnic minority groups continue to face when running for office.

Next year there will only be two governors who are men of color--Asian-American/Pacific Islander David Ige of Hawaii and  Latino Brian Sandoval of Nevada--and just two female governors of color--Susana Martinez of New Mexico and Nikki Haley of South Carolina. Only Ige was newly elected this year, with Sandoval, Martinez and Haley now in their final terms.

One particular governor’s race baffled the country in what could have been a history-making outcome: Anthony Brown lost his opportunity to become the first African-American governor in Maryland history and the third elected anywhere in the country since Reconstruction. Brown had multiple advantages in his favor. As a Democrat, he held a clear presumed advantage over Republican Larry Hogan in a state where Democrats outnumber Republicans more than two-to-one in party registration; he had the edge in experience, having served as Lieutenant Governor for eight years prior to running compared to Hogan, a businessman who had not served in elected office; he spent more campaign cash, with an estimated spending advantage of four-to-one; Democrats won the other two statewide elections, both by more than 14 percentage points; and he had endorsements and active support from a number of prominent Democratic figures, including President Barack Obama, Bill Clinton, and Hillary Clinton.

Yet Brown won only 46% of the vote. While commentators attributed Brown’s loss to his weak platform and an unclear identity, the role of race  in his loss remains a huge elephant in the room. Maryland remains a majority-white state, with 60% of the population identifying as Caucasian and 40% identifying as non-white in the 2013 Census. The three counties that Brown did best in are the counties with the largest African American population, but also had the lowest turnout in the state, leaving the race up to the predominantly white areas of Maryland. Because of statistics like this, racial minority candidates depend on white voters in order to gain a seat at the table. Kareem Crayton, an assistant Professor of Law and Political Science at the University of Southern California has noted in his research  that, “successful black candidates have to convince white voters that they can represent the entire community. It is instructive that the black candidates who have been the most successful in winning white support have provided people plenty of information about themselves.”

As this research indicates, candidates of color are more likely to seem untrustworthy if their majority-white neighborhoods do not know enough information about who they are and what they stand for, whereas a white candidate may be given more slack in the same situation. This could have been an unspoken factor in Brown’s campaign: the entire election was criticized by media outlets as an election where candidates rode on platforms without clear substance, yet Brown’s lack of a platform may have affected his campaign more deeply due to his race. It’s disappointing that media outlets like the Washington Post have not touched on Brown’s race in post-election analysis about his defeat.

Utah's Mia Love made history as the first African-American Republican woman to win a seat in Congress, but it’s also true that she had lost in the same district in 2012 and this year only won by a slim 3 point margin in a district that Mitt Romney carried by 37 percentage points. Some reports have suggested that Love may have toned down her African-American roots in a state where Brigham Young University pollsters found latent racial bias.

The first step in eliminating the racial bias embedded in elections is to begin to elect more people of color at all levels of government in order for people to rethink their notions of ethnicity and its impact on leadership. There are systemic changes we can make to the election process that may impact how many people of color are elected. One of those changes is switching to a ranked-choice voting system in multi-winner districts in which voters rank candidates by preference and like-minded voters win representation in proportion to their share of the vote. In the current winner-take-all system in the U.S., 50.1% of the population can control 100% of seats, many times leaving candidates that are part of a minority out of the running. In areas where neighborhoods are racially polarized, it allows white populations to be overrepresented because they vote more often than minority groups.

With multi-winner districts and a fair representation system, more voters can elect preferred candidates. Furthermore, voters in a ranked-choice voting system have been shown rank their candidates in a more balanced manner, as voters are more likely to vote for a woman or person of color as one of their preferences in campaigns that are less polarized. Ranked-choice voting has been used in a number of cities, including in San Francisco, where sixteen out of the eighteen elected offices are filled with individuals of color, an increase of nine after San Francisco switched to ranked-choice voting methods in 2004. While ranked-choice voting is only one of many solutions to the problem of underrepresentation of ethnic minorities in the U.S., it is a promising start that can create a pipeline of change.

There is an obvious problem underlying US elected offices--representatives do not reflect the communities in which we live if old, white men continue to represent a population that is much more diverse. While it is unclear what role race played in this midterm election, one thing is certain: people of color must navigate and negotiate their racial identity in a way that white candidates need not think about at all.  And with that fact alone, the U.S.'s political playing field becomes uneven.